Activist investor logs two wins in a week – will BHP Billiton be next?

“All eyes will now switch to Elliott’s latest target, UK and Australia-listed miner BHP Billiton, where the activist’s wish-list looks very similar to the new strategy outlined by Akzo today in a bid to fend off the fund manager’s attentions.

“Akzo Nobel chief executive Tom Büchner has today responded to pressure from Elliott, which has been calling for him to consider a takeover approach from American rival PPG, by revealing the results of his strategic review:

“In addition, Büchner has raised earnings targets and guidance for 2020. Whether any of this would have been considered without that Elliott-backed takeover is open to debate, and it as yet unclear whether this programme will fully placate the notoriously tenacious activist fund manager - in 2012 Elliott seized an Argentinian ship off the coast of Ghana as part of its dispute with Buenos Aires over 2002’s debt default and its implications for the Argentine bonds held in the fund.

“Akzo Nobel’s shares are up nearly 1% today to an all-time high just below €79 although this is still below the €88.7-a-share offer from PPG that Elliott is publicly backing. 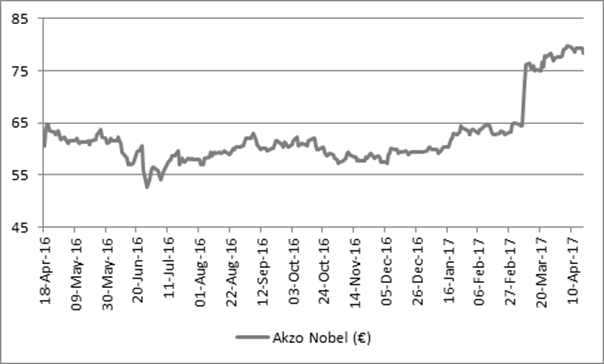 “The Büchner plan at Akzo Nobel looks very similar to what Elliott has been agitating for at BHP Billiton:

“BHP Billiton boss Andrew Mackenzie has dismissed Elliott’s proposals but is unlikely to see the hedge fund and 4% shareholder happy to retreat, as Argentina’s experiences and the multi-year campaign waged at Alliance Trust (where Elliott ultimately prevailed, prompting widespread management and operational changes).

“The list of suggestions at BHP Billiton is very typical of an activists’ wish-list, which tend to feature one (or more) of four usual thrusts:

“In this context, the BHP Billiton approach is classic activist investor material and Mackenzie and his boardroom colleagues need to be prepared for a lengthy power struggle - Elliott first bought shares in Alliance Trust in 2010 and only exited this year once its objectives had been met, to show how adept the fund manager has become at getting its way – something to which Katherine Garrett-Cox and Klaus Kleinfeld, former CEOs of Alliance Trust and Arconic, will attest.”