AJ Bell, the Salford based investment platform, and the Sharks Community Trust have joined forces to launch the ‘AJ Bell Easter Eats’ initiative which will see them distributing 3,000 food hampers to local families with school age children in the build up to the Easter holiday.

The food hampers will each contain a mixture of fresh and long-life produce and a holiday activity pack from mental health charity Place2Be. The hampers are designed to give families a helping hand over the Easter period, as well as providing something to engage children over the Easter holiday.

AJ Bell and the Sharks Community Trust, the charitable arm of Sale Sharks, will be working with local schools in and around Salford to identify families that could benefit from an AJ Bell Easter Eats hamper and staff will then deliver the hamper to their school or home.

As part of the initiative, AJ Bell staff will be donating Easter eggs that will also be distributed via the local schools it is working with.

The initiative is the latest to be funded by AJ Bell’s Wage War on COVID fund which was set up at the outset of the pandemic to provide support to people directly impacted by the COVID crisis. £380,000 has been raised through donations from AJ Bell staff, customers, financial advisers and the general public.
The fund sits under the umbrella of the AJ Bell Trust, a UK registered charity which kick started the fund raising by allocating £50,000 of its charitable reserves to the Fund.

The fund initially donated £30,000 to local food charities which were in huge demand as the pandemic started to affect people’s jobs and everyday lives. One of those charities, FareShare Greater Manchester, is now providing some of the food for the Easter Eats hampers.

AJ Bell then launched its own initiative which saw it donate over 600 digital tablets to care homes and hospitals around the UK to help residents stay in touch with loved ones during lockdown.  It then extended this to donate a further 140 digital tablets to OnSide Youth Zones to support their summer holiday clubs and help re-engage young people with education in the run up to schools reopening in September.

In addition, the fund has made smaller donations to over 30 charities and organisations that were nominated by AJ Bell staff in recognition of their amazing efforts in helping tens of thousands of people negatively impacted by the COVID pandemic.

Sale Sharks have also been hard at work during the pandemic to support vulnerable people in Manchester. In December, the club launched a campaign to support homeless charity CentrePoint, which was inspired by a chance meeting between winger Marland Yarde and a young homeless man.

Marland himself also hand delivered a van load of winter clothing donated by the club’s players and staff to CentrePoint and organised a delivery of hot meals to the charity’s hostels in January.

“Families with school age children have been amongst the hardest hit by the COVID pandemic. They have had to get to grips with home schooling whilst many of them have seen their incomes reduce or disappear completely. The AJ Bell Easter Eats initiative is designed to give these families a helping hand in the run up to the Easter holidays, after which they can hopefully look forward to further easing of lockdown restrictions and life returning to some level of normality.”

“Demand for food has never been higher in the communities we serve and, thanks to the support of partners such as AJ Bell and Sharks Community Trust, we have doubled the amount of food we distribute each week in response to the crisis. Unfortunately the reality is that the hard work is far from over – 90% of the charities we serve say demand will either remain the same as crisis levels or increase – so we welcome AJ Bell’s continued efforts to help FareShare and other charities get good food onto the people who need it most.”

“The club, and the Trust, are committed to supporting the communities that we live and work in, and this project with AJ Bell is a perfect way to do that, at a time when many families need extra help.

“It has been such a challenging time for so many people and this year, more than ever, it’s so important that we do our bit to help.”

“Sale Sharks is proud to be supporting the Easter Eats programme with AJ Bell and our own Community Trust.

“The club has a strong tradition of working with AJ Bell and the work that is now taking place to support families living within Salford in close proximity to the AJ Bell Stadium is a positive extension of this partnership. Sharks Community Trust supports thousands of people within the North West and Easter Eats will continue to see this support reaching people who need it most.” 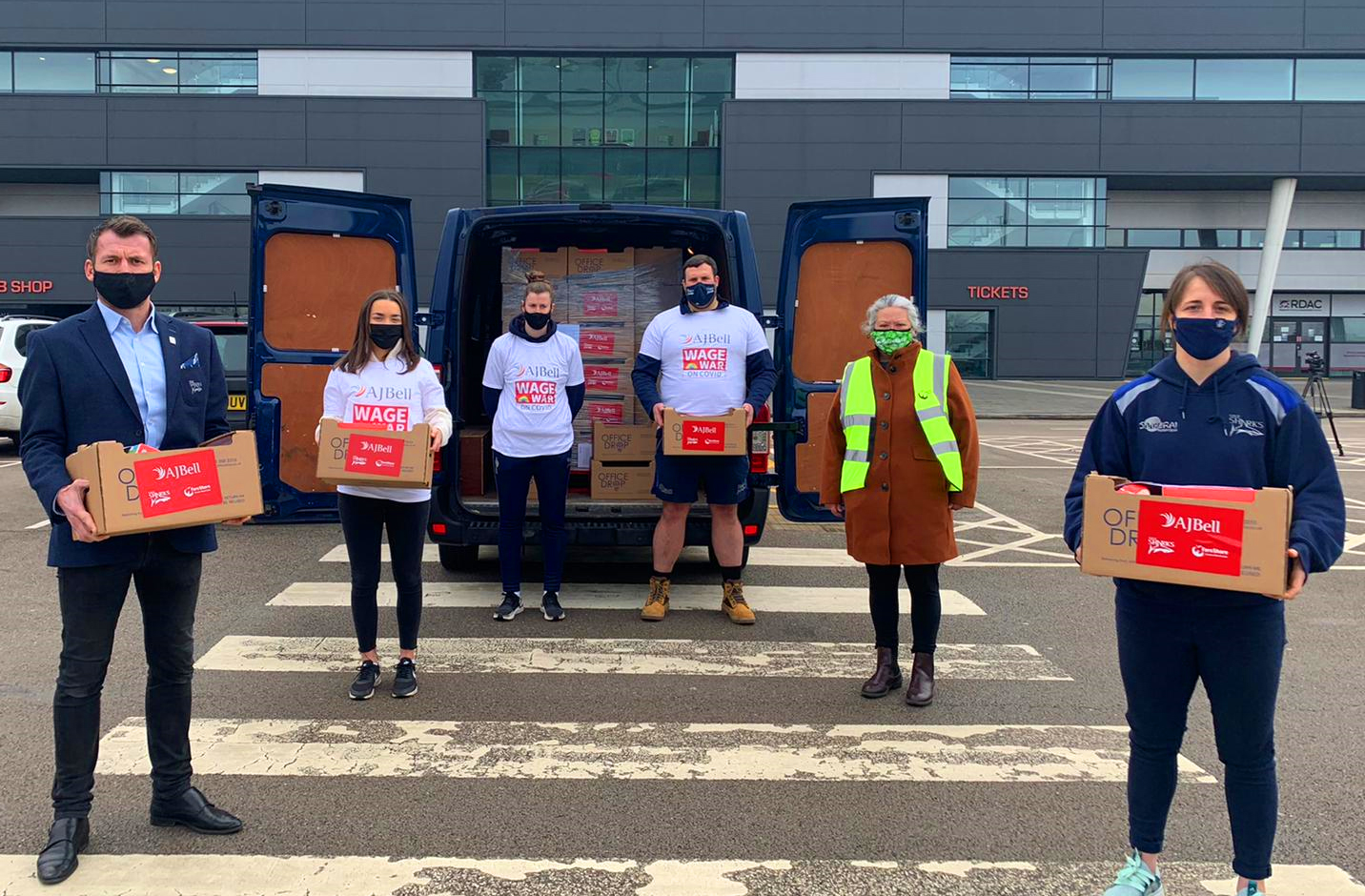