Alas, Smith & Adams continue to be on the money about inflation

“If consumers thought Andrew Bailey, the Governor of the Bank of England, was apocalyptic in tone when he spoke to a Parliamentary committee about inflation, then they should try reading Adam Smith’s The Wealth of Nations,” says AJ Bell Investment Director Russ Mould. “The eighteenth-century political economist wrote: 'History shows that once an enormous debt has been incurred by a nation, there are only two ways to solve it: one is to simply declare bankruptcy and repudiate the debt. The other is to inflate the currency and thus to destroy the wealth of the ordinary citizen.'

“That neglects the third option, which is to get the economy growing so the debt can be paid back, and a fourth, which is to start a war, but unfortunately Smith seems to be spot on.

“At one end of the spectrum, Sri Lanka looks set to become the latest nation to default, in the wake of Suriname, Ecuador Belize and Lebanon (while creditors continue to wrestle with what to do about serial offender Argentina).

“At the other end we have the UK, where inflation is running rampant after 13 years of monetary policy experimentation, in the form of record-low interest rates and Quantitative Easing (QE). 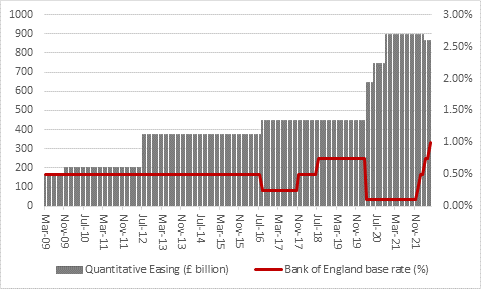 “In some ways, this rather suits governments. It boosts nominal GDP figures and therefore helps to deflate debt/GDP ratios from their historically uncomfortable levels of north of 100%.

“But as in all economic decisions, not everyone can win – choices have to be made between winners and losers. In this case, Government may win, but the public may lose, as their standards of living, and the real-terms value of their savings are eroded (although anyone with heavy debts may be less distressed as their borrowings are going down in real-terms, too).

“And it is inflation that is doing the damage.

“As benchmarked by the consumer price index, inflation is now running at 9%, a record high for the dataset, which dates to its launch in 1997. To give a better perspective, the “core” CPI measure, which in theory contains elements that Bank of England policy can control, is running at 6.2% and inflation according to the retail price index is 11.1%.

“RPI may no longer be an officially recognised statistic, but its longevity makes it useful – if even if the wider public may cringe to see that the last time RPI inflation reached 11.1% was February 1982, when the Bank of England base rate stood at 13.625%. That puts any commentary that the Bank of England is speaking or acting firmly in the proper perspective. It is, in fact, still playing fast and loose. 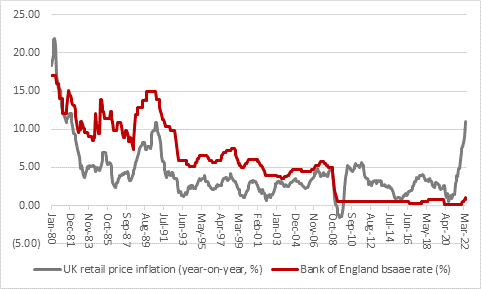 “It is unlikely the Scotland-born Smith would have been too impressed by central banks’ insistence on goosing the global financial system with cheap money, to try and stave off recession.

“The Federal Reserve earned its anti-inflation credentials under Paul Volcker (1979-87) but has gradually lost them under his successors, the latest of whom is Jay Powell.

“Alan Greenspan, Ben Bernanke, Janet Yellen and now Jay Powell have regularly intervened in the economy, the markets or both to provide monetary stimulus in response to a crisis, only to arguably lay the foundations for the next one with their cheap, ready money.

“Then came the Greek debt crisis and – after a lengthy gap when central banks had the chance to tighten policy but chose not to - then came COVID-19.

“Each time central banks responded with bail-outs, rate cuts and cheap money, or all three.

“Each time the effect has been a new speculative session in a new asset class or geography and fresh damage once that episode has ended with the traditional bang (a feeling which speculators in tech stocks, meme stocks and cryptocurrencies can now perhaps better understand.

“Central bankers have been terrified a downturn and a deflationary episode, which would take a terrible toll on the global economy, given how much debt there is in the system. They may have viewed inflation as the lesser of the evils on offer, and hence many pronouncements in favour of, and defending, so-called ‘helicopter money’.

“But as Adam Smith points out that does not mean no-one will get hurt. Inflation is a far from supine beast and it erodes the real value of money. Drastic and painful action will be needed to rein it in. Another famous writer’s work showed that he got this, too.

“Fans of Douglas Adams’ book The Hitchhiker’s Guide to the Galaxy will remember what happens when the Golgafrinchams crash land on Earth. A management consultant proudly tells Arthur Dent and Ford Prefect that leaves have been adapted as a new working currency and as a result everyone has become immensely rich. The same consultant does then add a caveat - the plentiful availability of leaves means there is an inflation problem, with three forests needed to buy a ship’s peanut. In response, forests are to be torched, in an effort to quell the rampant surge in the cost of living.

“Central bankers take note. They have painted themselves into a corner by keeping money cheap for so long and encouraging borrowing to try and fend off a recession or crisis. Raise rates too fast and the economy may slow very quickly. Raise rates too slowly and inflation will do damage in a different way, both economically and socially.”