“Online store sales fell by 3%, shipping costs surged by 14% and operating profits fell year-on-year for the third time in a row as Amazon served up a disappointing first quarter of 2022 and weak guidance for the second,” says AJ Bell Investment Director Russ Mould. “The firm therefore isn’t answering any of the questions begged by its mixed-bag fourth-quarter results from last year and shareholders also need to note that the company was cash-flow negative for the sixth time in eight quarters. As a result of that net debt, including leases, has surged to $47 billion from $14 billion two years ago, and those leases will need to be paid, whether profits and cashflow are good, bad or indifferent. 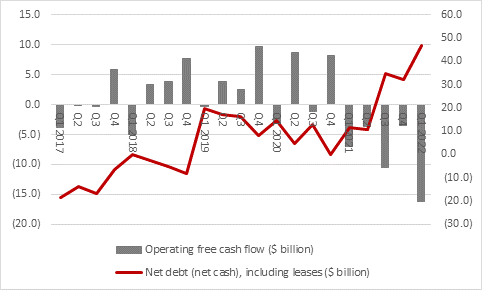 “Even allowing for how the headline net profit and earnings per share figures were hit by an accounting loss on Amazon’s stake in electric vehicle maker Rivian – thus undoing a fair chunk of the accounting gain which do much to flatter the fourth quarter numbers – it is not easy to dress up the first-quarter figures. 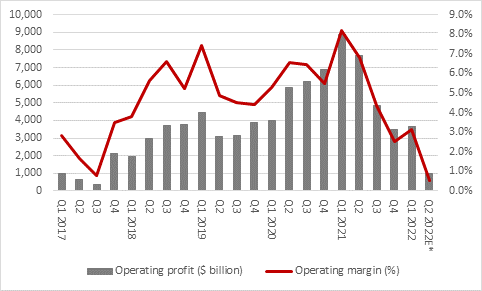 Source: Company accounts. Q1 2022E based on mid-point of management guidance give alongside Q1 2022 results

“The North America and International operations went into loss, as online sales fell, to leave Amazon leaning more heavily than ever on its cloud-hosting operation AWS. AWS is a truly wonderful business, as it generates a return on sales of 35% and is still growing by more than 30% year-on-year, but the weakness in online sales will be a concern, not just to shareholders in Amazon but any investor who has concluded that online is the only way to go as a retailer. 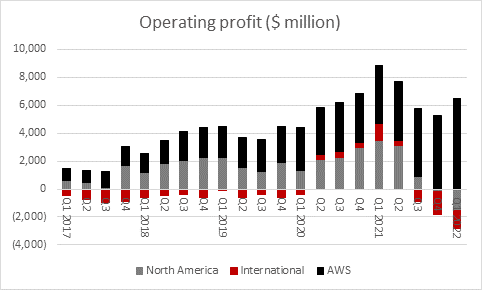 “AO World shareholders will grimace at this point, but it seems that even online sales are not immune from the cost-of-living squeezed caused by inflation and it is getting ever harder to avoid the conclusion that monetary stimulus from central banks and fiscal stimulus from Governments boosted online sales during the pandemic and lockdowns to levels that have proved hard to sustain once the effects of the ‘stimmy’ has started to wear off.

“Die-hard Amazon fans will counter by arguing that the company has seen profit slumps before and come back all-the-stronger. Moreover, the firm has continued to invest in staffing numbers (up by 351,000 people, or 28% in the last year), warehousing capacity and also prime content for its entertainment business, costs now which are designed to yield substantial payback in the future. Whether consumer spending cutbacks, including possibly on streaming services, take their toll and delay that payback is now a key question.

“And it is a key question because Amazon’s valuation is still so lofty. Even though the after-market 10% drop means the shares are down by 30%, and the market cap is down by $550 billion, from last summer’s all-time highs, the company still carries a $1.3 trillion price tag.

“Based on current consensus forecasts for net profit in 2022 of $24 billion – a figure that looks exposed on the downside for now, based on second-quarter guidance – Amazon trades on 55 forward earnings, when the wider US market trades on something just north of 20. Amazon needs to deliver premium growth to merit that premium rating and a third quarter in a row of down-earnings with a fourth to come hardly fits that billing. Such fripperies as stock split and share buybacks cannot compensate for weak growth, at least not for long.

“The second-quarter guidance for sales of $118.5 billion and an operating return on sales of between a $1 billion loss and a $3 billion profit are both well below what were the consensus estimates going into the quarterly results, even if analysts had already been expecting a figure that came in below that of Q2 2021.”