Are airline stocks returning to type as times get tougher?

“A profit warning from American Airlines, on top of one from Delta last week, and the recommended bid for Flybe from a consortium of just one penny a share, or £2.2 million, (plus the company’s debt) all look like fresh reminders to investors of just how volatile the airline industry can be,” says Russ Mould, AJ Bell Investments.

“So bad was the industry’s record as an investment that Warren Buffett wrote in his 2008 Letter to Shareholders that ‘A durable competitive advantage has proven elusive ever since the days of the Wright Brothers. Indeed, if a farsighted capitalist had been present at Kitty Hawk he would have done his successors a large favour by shooting Orville down.”

“Yet Buffett changed his mind this decade as low-cost models predominated, the economy recovered and – most importantly – airline operators showed greater discipline when it came to bringing on fresh capacity.

“His investment vehicle Berkshire Hathaway’s latest regulatory filing showed holdings in American Airlines, Delta Airlines and Southwest Airlines although it will be interesting to see Buffett’s thoughts on this in the 2018 Letter to Shareholders due in late February, after the profit warnings from both American and Delta.

“European airlines have also encountered turbulence in the last couple of years, with the failures of Monarch, Primera Air, Air Berlin and Alitalia, while Flybe has been sold off for next to nothing, plus its debts.

“A surge in oil prices in 2017 did not help but capacity has been increasing too, especially in the budget, low-cost arena, just when the global economy has begun to slow down.

“Airline stocks have begun to lose altitude as a result, after a stunning run – the MSCI World Airlines index has gained 161% since its March 2009 low (although intriguingly even that has underperformed the MSCI World’s 184% gain): 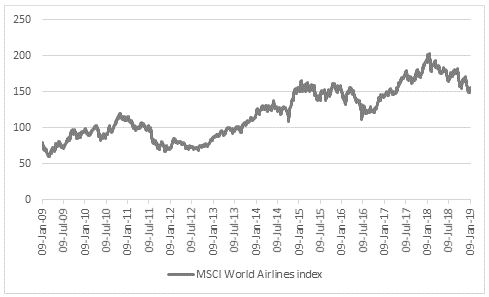 “American cited lower-than-expected bookings for expensive, last-minute tickets going into Christmas, echoing Delta’s earlier comments, to raise fears over pricing in the industry (the perennial bugbear that so frightened Buffett over a decade ago).

“UK-quoted airlines have not been immune, with fears over capacity growth also prevalent and Brexit and operational mis-steps at Ryanair additional complications.

“The other airlines look to be taking the Stobart-Virgin-Cyrus consortium’s purchase of Flybe in their stride today, even if the buyer’s plans to combine Flybe and Stobart Air, increase traffic through Southend Airport and provide connections to Virgin’s long-haul business hardly suggest that capacity will be coming out of the market – if anything, they may mean the opposite.

“Investors in the sector will be hoping that capacity discipline is maintained but it may not be a coincidence that the MSCI Global Airlines sector peaked in January 2018, just months after American Airlines chief executive Doug Parker suggested in October 2017 that the industry had truly changed its ways.

“Mr Parker suggested that the airline industry would make money ‘in good times and bad,’ a marked change from the days when carriers would go broke at the drop of a hat.

“This did sound worryingly like an argument that the cycle would be different this time – always a bad sign – although in fairness to Mr Parker American Airlines is still forecasting earnings per share of $2.92 to $3.12 on a stated basis, which implies net profits of more than $1.4 billion at the mid-point of the new guidance, even if that is well down from the $1.9 billion the company made in 2017.”