Are cannabis stocks already running out of puff?

“The latest advances to new all-time highs in America’s Dow Jones Industrials and S&P 500 indices continue to grab a lot of attention, but if you take a step back, both benchmarks are making hard work of it – they are barely 5% higher than they were in January 2018”, says Russ Mould, AJ Bell Investment Director. “That’s hardly a huge return given that everything supposedly looks so rosy and it is also interesting to note that some previously hot sectors are starting to run a little cold, with cannabis stocks a notable example.

“Despite all of the hype surrounding the legalisation (or decriminalisation) of cannabis for medical or recreational use in many US states and the whole of Canada pot stocks have started to lose their way, even as the major US equity indices have moved higher.

“This can be most easily seen by looking at the price of the leading exchange-traded funds (ETFs) that trade in the USA and are dedicated to following the performance of a basket of cannabis-related stocks and then delivering that performance to investors, minus their running fees.

“The biggest is the $1.1 billion ETFMG Alternative Harvest ETF, which launched in 2015. It is up by around a fifth this year but trades around a third lower than it did at its highs of last autumn. 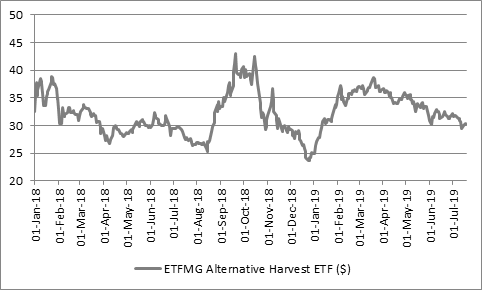 “The AdvisorShares VICE ETF also seems to have lost some of its investor appeal and the AdvisorShares PureCannabis ETF, launched in April, has yet to give its owners too much of a lift. 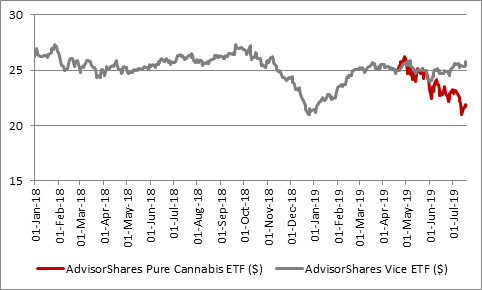 “This is not to say that this fledgling industry is already a busted flush. But investors need to be aware of the financial history of agriculture – farmers tend to be subsided for a reason – as well as the regulatory risks and the danger that supply of the product as well as investment options simply outstrips demand. And that is before we get to the issue of valuation.

“A strong story alone may not be enough to keep cannabis stocks at their highs and investors need to be careful lest they fall for the latest investment fad.”