“Ashtead is brushing off an 8% slide in the shares of one of its biggest rivals, United Rentals, in the view that the American firm’s problems are company-specific but shareholders will still need to keep an eye on the bigger picture Stateside,” says Russ Mould, AJ Bell Investment Director.

“Shares in United Rentals dived yesterday as the company reported second-quarter numbers that beat expectations, only to follow up by cutting the top end of the range for its earnings guidance for the rest of 2019.

“United Rentals is a major competitor to Sunbelt, which generates roughly 90% of Ashtead’s sales and profits so the less optimistic outlook could in theory be a concern for investors in the UK firm.

“However, shareholders do not seem concerned, for three possible reasons.

“Second, United Rentals flagged ‘historically bad weather across several key regions’ as an issue. Such factors should be temporary and have no lasting impact upon business levels – which could easily snap back once the sun comes out – or Sunbelt’s long-term competitive position within the US market.

“Finally, United Rentals noted some issues with regard to the integration of its BlueLine acquisition, an entirely company specific issue.

“As such their relaxed response to the United downgrade is understandable but investors need to keep their wits about them. United Rentals’ share price peaked in spring 2018 and Ashtead has yet to recapture the highs it reached last autumn. 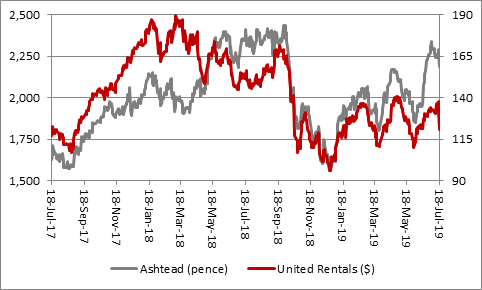 Source: Refinitiv data
“This may reflect gathering concern over the 10-year-long US economic upturn. Ashtead’s American Sunbelt operation gets 47% of its sales from the construction industry and 53% from other parts of the US economy, as it provides aerial work platforms, fork lifts, earth movers, temporary power supply units, scaffolding and other equipment.

“A continued recovery in sentiment (and activity levels) across the housebuilding industry in the US would be particularly welcome after 2018’s second-half slump, which followed the increase in mortgage results that in turn resulted from the Federal Reserve’s sequence of interest rate hikes. There has been some improvement this spring but the NAHB index has yet to return to its early 2018 highs. 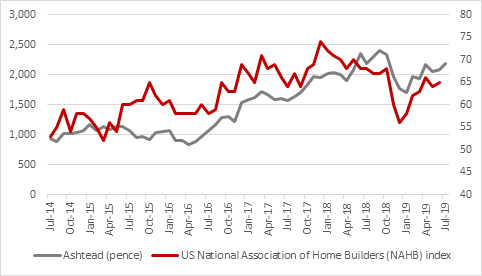 “US industrial production began to lose steam in the second half of 2018 as well and Ashtead shareholders will be looking for improved momentum here, too. 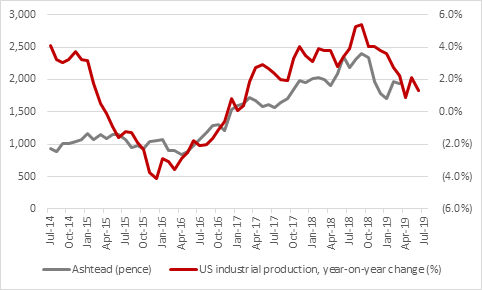 “Fans of Ashtead will also point to how the ISM manufacturing purchasing managers’ index (PMI) still sits above 50, which is usually suggestive of future growth.

“Sceptics will counter by noting how this indicator peaked last August and has weakened since so it will be interesting to note this trend in the coming months, especially since Ashtead’s fourth-quarter report in June, and planned fleet expansion, gave no hint of any real softness in the US economy.” 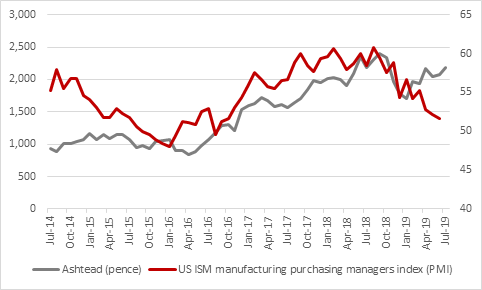