“The decision by Warren Buffett to extend Berkshire Hathaway investment vehicle’s share buyback is catching the headlines because it suggests the legendary investor is struggling to find a company that he wants to acquire at a price he wants to pay. Yet the Sage of Omaha is careful to point out in Berkshire’s latest annual report that this should not be interpreted as an attempt to time or call the markets and a careful reading of his latest missive shows he still believes that US stocks offer much better value than either bonds or gold, over the very long term,” says Russ Mould, AJ Bell Investment Director.

“Berkshire’s cash pile, including short-term investments in US Treasury Bills (which have a maturity of less than a year), stood at $112 billion, just a touch below the $116 billion all-time high reached at the end of 2017.

“A $500 million increase in acquisitions to $3.2 billion, the $1.3 billion share buyback scheme and a near $25 billion swing in net investment in US equities explain the slight drop, even as Berkshire’s operating assets continued to thrive. 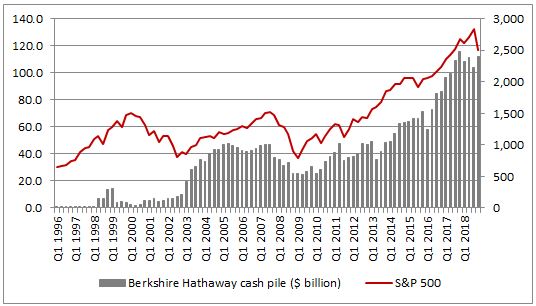 “The increased spend on stocks suggests that Buffett and business partner Charlie Munger can selectively find American companies whose returns on equity and business positions mean they still come at a sensible price, even if the duo is struggling to find an appropriately-valued deal that is big enough to really make a difference across Berkshire’s $700 billion-plus balance sheet.

“An analysis at Berkshire’s balance sheet breaks down by asset mix, rather than in just absolute dollars, suggests that the Sage of Omaha is also still of the view that US stocks offer much better value than US Government bonds over the long term.

“At $19.9 billion, US Government bonds represent just 2.8% of Berkshire’s assets. Although that represented an increase from the 2.5% allocation in Q3, that came in lower than Q4 2017’s 3.0%, to continue a downward trend that has been in evidence since 2003. 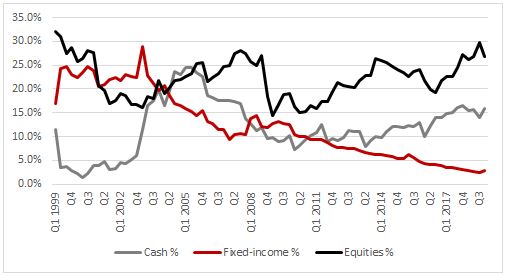 “Perhaps Buffett feels US Government bonds represent poor value, given what remain relatively low yields on a historic basis and how inflation (and especially wage inflation) are starting to pick up. US wages grew 3.2% in January, almost a ten-year high, figure which suggests a autumn drop in the headline overall inflation rate to 1.6% may not last long, a trend which could mean that even a 2.6% yield on the US 10-year Treasury, for example, may not offer as much wealth protection as you would like.

“Yet even here it is not Buffett’s style to make macroeconomic calls, as he stresses more than once in his ever-informative Letter to Shareholders.

“Instead, he again stresses the importance of buying businesses with strong competitive positions that are well backed by investment, have limited debt and can generate high returns on assets, a combination that should also fund generous dividend payments or – under select circumstances – share buybacks.

“Buffett takes pains to contrast the 20% return on tangible equity offered by the major equity holdings of Berkshire Hathaway, which include American Express, Apple, Coca-Cola and Bank of New York Mellon, and how this massively exceeds the current yield of US 30-year Treasuries.
“To conclude, Buffett reaffirms his well-known antipathy to gold – even though the precious metal seems to be on a roll, as it trades comfortably above $1,300 an ounce. Having dismissed it on several occasions, thanks to its inert physical qualities and resulting inability to generate neither cash nor yield, Buffett compares gold’s performance to that of US equities over his 77-year career, which began with a $114.75 investment in 1942.

“This is unlikely to shift gold bugs from their perch, as they will counter that the metal was a great source of protection during the 1930s, 1970s and early 2000s when economic times got tough and global indebtedness a worry, even if Buffett concludes by arguing that ‘the magical metal was no match for American mettle’ during his own career.”