“Whoever arranged the attacks on Saudi Arabia’s oil infrastructure knew what they were doing, as the assault came straight after Riyadh had appointed the syndicate for the stock market flotation of its national oil company, Aramco, and US President Donald Trump had sacked his most aggressive foreign policy adviser, John Bolton,” says Russ Mould, AJ Bell Investment Director.

“But besides considering the unidentified aggressor’s motives, investors have to think about the implications for the oil price. After an initial 20% gain, Brent Crude is now up by some 9% to around $65.50 a barrel. Saudi Arabia’s output of some 10 million barrels of oil a day equates to roughly 10% of global supply and demand so a sustained outage could drive crude prices higher.

“That said, OPEC and some non-OPEC members, notably Russia, have been holding back production, so there will be some slack in the system. In addition, American oil inventories stand at around one billion barrels of oil, including 644,000 barrels in the Strategic Petroleum Reserve, which the US is saying it is happy to tap to help keep oil prices under control.

“This does suggest that oil prices may not be ready to rip higher. Equally, this is not the first attack on Saudi Arabian facilities and it is unlikely that too many oil traders will want to be short of crude, or equity traders short of oil stocks, in the current environment, so the commodity and share prices may find themselves well underpinned, at least in the short term.

“If oil were to make further big gains for any reason – such as another attack – then that would be a potential danger to the global economy and financial markets (although in the event of a wider Middle Eastern conflagration petrol and share prices would probably be the least of our worries).

“The experiences of the 1970s show the financial damage that could be done. The oil price shock of 1973-74 tipped the world into recession and sparked off a bout of inflation that took nearly eight years to tame. Financial markets are not prepared for either eventuality, given the lofty valuations which characterise both stock markets, which are pricing in economic recovery and further corporate earnings growth, and bond markets, which are pricing in a continuation of the low-growth, low-inflation environment that has prevailed for the past decade.

“While some oil-exporting and shipping-exposed nations would possibly benefit from higher oil and gas prices, history suggests that the extra cost borne by corporations and consumers in the West would be a substantial brake on economic growth.

“On six of the last eight occasions when oil prices have risen by more than 100% year-on-year, global economic activity has slowed, or even tipped into recession. (The exceptions were 1987, which is an infamous year anyway, and 2017). 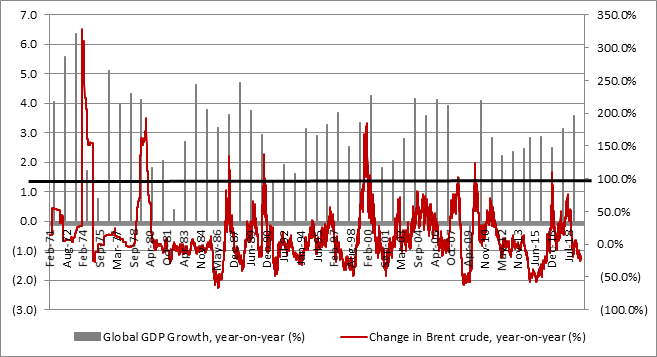 “The good news is that even after today’s spike, oil is still almost a fifth lower than where it was a year ago. Crude would need to reach $160 to more than double from where it was in September 2019 so economists, analysts, investors and car-drivers can probably breathe easy for now, even if oil prices and oil stocks may find a floor for now – even Saudi Arabia’s Tadawul stock index is broadly unchanged this morning at the 7,800 mark, although the benchmark has lost all of the gains that it had made earlier in the year. 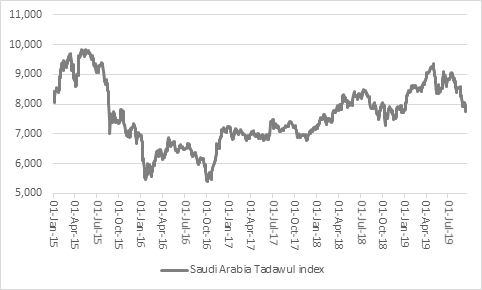