“The health of UK banks is important to retail investors as they represent 14% of aggregate FTSE 100 dividends, with HSBC and Lloyds both in the list of 10 largest cash distributors.  (See chart below for forecast dividend yields in 2016.)

“Whilst only Royal Bank of Scotland failed the tests, one of the scenarios that should be carefully noted assumes that all of the banks could either cut or fail to reinitiate dividend payments to shareholders, in the event they needed to build up an additional layer of safety during a period of market and economic stress.

“Only HSBC and Lloyds passed the minimum capital requirements and the tougher balance sheet tests targeted by the Bank of England without the need for additional capital raising, dividend cuts or the conversion of so-called AT1 bonds into shares.

“These tests demand that the banks meet a minimum level of Core Equity Tier 1 (CET1) capital as a percentage of their overall assets, so they withstand losses during a range of potential negative outcomes and not require further financial assistance.

“The worst-case scenario used to challenge the banks’ financial health includes a deep recession in the UK and globally, a big jump in UK unemployment, a 31% plunge in UK house prices, a property downturn in China and a drop in oil to $20 a barrel.

“Under these circumstances Barclays and Standard Chartered both miss their targeted capital levels although the Bank of England remains confident that each is already capable of, and working, on raising the additional liquidity.

“One tactic each could use to build up an additional buffer is to further cut their dividends, following the reduction pushed through over the last two years. As the report puts it: “During a stress, with a significant fall in bank profits, investors should expect a material cut in dividends.”

“The Bank of England’s tests assume, in a most extreme case, that RBS holds its dividend at zero and Barclays, Lloyds and Standard Chartered cut their payments to nil. The scenario also assumes HSBC cuts its shareholder pay-out by around three-quarters, cutting its prospective dividend yield from 6.3% to around 1.7%.

“Whilst this is an extreme scenario, it does highlight the importance of banks financial health to retail investors as Lloyds, Barclays and HSBC in particular are consistently amongst the most popular share purchases via our platform.” 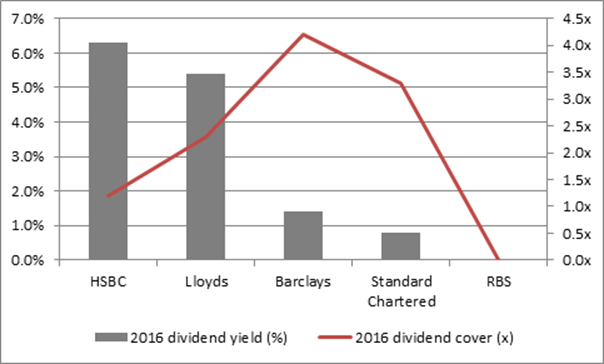