The Bank of England’s scorecard after 25 years of independence

•    6th May is the 25 year anniversary of the Bank of England being granted independence
•    Over that time, CPI inflation has averaged 2.1%
•    However there has been significant variation, with almost a third of monthly readings falling outside the range of 1% to 3%
•    Markets are pricing in a rate rise next Thursday, but there is scope for a surprise
•    The Bank now faces a stern test of credibility, as it balances containing inflation against nudging the economy towards recession

“One of the first things Gordon Brown did on becoming Chancellor in 1997 was to grant independence to the Bank of England. He didn’t hang about either. The general election took place on 1st May, and on 6th May, Brown announced the Bank would become independent. Central bank independence is now so deeply engrained that it’s bizarre to think that not so very long ago, it was the Chancellor who tightened and loosened the strings of UK monetary policy.

“Over the last 25 years, CPI inflation has risen by an annualised a rate of 2.1% a year, in other words, almost bang on target. That suggests central bank independence has been a rip-roaring success, though that overall rate of inflation doesn’t reveal the considerable variations along the way.

“The Governor of the Bank of England is obliged to write to the Chancellor if CPI inflation deviates by more than one percentage point from the 2% target, which implicitly sets a level for what can be considered off-track inflation. Over the last twenty five years, almost a third of CPI readings since independence have been outside the 1% to 3% range. (CPI in fact became the measure for the inflation target in December 2003, prior to which the RPIX index was used. The RPIX target was 2.5%, broadly equivalent to 2% CPI in the long run, due to differences in the way the two indices are constructed).

“Overall the numbers show that UK inflation has remained pretty well contained over the last 25 years of central bank independence. As ever with monetary policy, it’s the imponderable counterfactuals which make conclusive judgements so hard to come by. In particular, the era of central bank independence has coincided with globalisation, ageing demographics in developed economies, and significant technological advances, all of which have helped to keep a lid on inflation.

“In theory, an independent central bank should be more hawkish in deciding interest rates than a Chancellor who is subject to the whims of the electoral cycle, but it’s hard to imagine how monetary policy could have been much looser in the last decade or so. That said, irrespective of the frequent criticism levelled at the Bank of England, there are few who would argue that monetary policy would be better in the hands of an elected official.”

“The likelihood is that the interest rate committee will raise rates again in its coming meeting to combat soaring inflation, but we shouldn’t be too surprised if they hang fire because of the storm clouds gathering over the global economy. Continued high energy prices and supply chain disruption stemming from COVID lockdowns in China have impaired the macro-economic outlook, and the central bank may feel that pressing down hard on the brakes might not be the best idea in the current environment.

“Markets have priced in a rate hike to 1%, but the May interest rate decision will be accompanied by a quarterly update to the Bank’s economic projections, which provides some scope for surprise. A decision to keep rates on hold, or even a contested decision to hike rates, could see sterling come under pressure. The inflation figures themselves will play second fiddle to labour market projections in the Bank’s considerations, because wage demands reveal how entrenched inflation expectations are becoming and are actually something the central bank can take action on, unlike global energy prices.

“It’s sobering to consider how quickly inflation has reared its head again, and to think that only a year ago, the Governor of the Bank of England was writing to the Chancellor to explain why inflation was so far below target. The pen friendship of Andrew Bailey and Rishi Sunak can of course be largely explained by the yo-yo effect of the pandemic on the inflation numbers. But we are now moving into a phase when the distortive base effects of lockdowns are fading into the rear view mirror. The coming months will see the Bank of England performing a high wire balancing act between retaining credibility on inflation-targeting on the one hand and nudging the economy towards recession on the other. At times like these, the Chancellor must be thankful that setting interest rates is one problem he doesn’t have to contend with.” 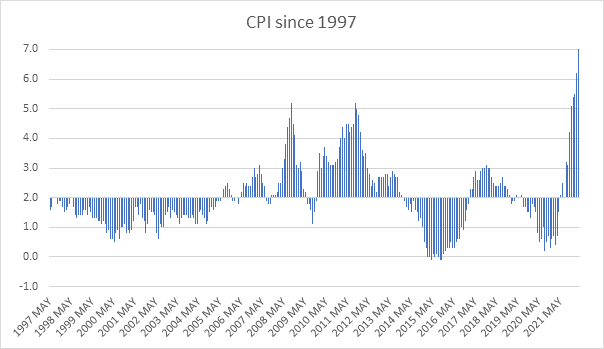