“Those who invested in Bitcoin at the peak last November aren’t quite in total wipeout territory, but they can see it from here, having registered a 70% loss on in a short space of time. The thing is Bitcoin isn’t behaving particularly unusually and losses of this magnitude are to be expected, especially after periods of equally extreme price appreciation. Crypto is a tremendously speculative asset and most of those who have invested have done so with their eyes open to the risks, and with a small amount of money they can afford to lose. A minority have invested larger sums and with little acknowledgement that what goes up can come down, and for them the current crypto downdraft will be particularly painful. Of course many longer term holders will still be sitting on considerable profits albeit heavily reduced by recent price falls.

“The question facing Bitcoin holders today is what they should do. Certainly it doesn’t feel particularly sensible to sell an asset that’s fallen 70% in value unless there is some significant news which fundamentally alters its value. That’s where Bitcoin comes a bit unstuck though as the price is heavily driven by sentiment rather than any intrinsic features of the cryptocurrency itself, so there’s not much investors can hang their hat on when it comes to explaining price falls, or analysing what the future holds. To a high degree Bitcoin’s performance will depend on how the rest of the crypto crowd is feeling. A bit like a colossal game of spoof, it’s simply impossible to predict how many coins everyone else is holding in their hand.

“There is some encouragement for battered Bitcoin investors in the previous price performance of the cryptocurrency. It has suffered crypto winters before and come back to have its day in the sun. Indeed, Bitcoin’s worst recent performance saw the cryptocurrency fall by 83% in the year to December 2018. It then went on to reach fresh record highs in 2020 and 2021 (source: Refinitiv data from 2014, based on closing dollar prices). So it wouldn’t be a total surprise to see Bitcoin stage a Lazarus-like recovery. Investors who have just put a small amount of money in, essentially as a call option on Bitcoin at some point becoming a widely used global currency, will probably feel that it’s worth keeping their chips on the table.

“This is a punt though, and the risk is that at some juncture, the whole market decides that rather than being the future of money, crypto is just a case of the emperor’s new clothes. If that happens, crypto prices could enter terminal decline. There is a significant crypto industry that has now been built on the back of the popularity of crypto trading, and that’s not going to go down without a fight. Meanwhile, high profile proponents of crypto like Elon Musk and Matt Damon will likely still muster considerable support for crypto amongst their fan bases, and while boredom and spare cash might have dissipated amongst the meme stock community, there’s no telling what might spark activity again. Crypto investors might therefore hold on in the face of adversity, but if they are lucky enough to see soaring prices in the crypto market again, it would be prudent to at least consider heading for the exit doors with some profits in tow.” 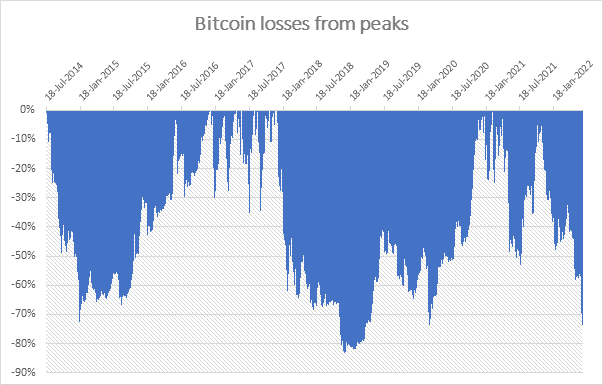