BP adds a billion pounds to the buybacks bonanza

“They say that cash is king, and investors are certainly cheering BP’s decision to not only increase its dividend but launch a fresh share buyback. This one is worth $1.4 billion (or £1 billion at current exchange rates), on top of the $500 million returned to shareholders in the first half of this year,” says AJ Bell Investment Director Russ Mould.

“That takes the total buyback bonanza so far to £12.8 billion from 14 FTSE 100 companies, adding to the £78 billion analysts believe they will pay out in ordinary dividends.

“BP’s forecast dividend for 2021 comes to around £3 billion – enough for a yield of more than 5% - and the buybacks put another £1.4 billion into investors’ pockets. That total pay-out of £4.4 billion represents more than 7% of the oil major’s current market capitalisation.

“Investors must now weigh up whether that return offers more than compensation for the risks associated with owning BP’s stock, as the company tries to maximise the value of its existing hydrocarbon assets (and avoid being left with ‘stranded’ oil and gas reserves) while investing in renewables and shifting its business mix toward alternative sources of energy. It must also do all of this while navigating volatility in oil and gas prices, although at least they are both helping at the moment.

“The question of whether the buybacks actually make any lasting difference has to be addressed, especially in light of the argument that BP needs to invest in its core operations. Handing cash back to shareholders does not make BP a better business or company, even if it provides investors with near-term gratification. Nor does it necessarily help the share price much.

“BP ran buyback programmes worth $33 billion between 2005 and 2007 as the oil price boomed and has returned $39 billion via this mechanism over the past 16 years. Yet BP’s shares are no higher now than they were in 1996. 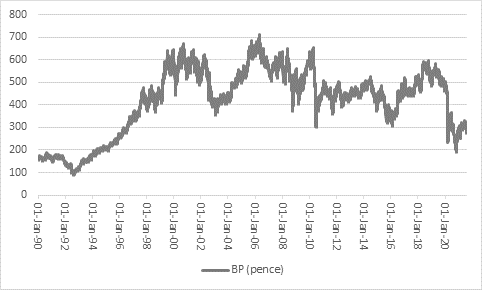 “BP also has a bit of a chequered history when it comes to dividends in light of the cuts of 1992, 2010 and 2020 when falling oil prices, self-inflicted woes or debt (or indeed a combination of all three) forced a reduction in the shareholder distribution.

“What investors can say is that the buybacks and dividends have at least rewarded their patience in some ways. Since the 2005-07 oil boom (and then bust), BP has paid out £75 billion in dividends and £26 billion in buybacks – and that compares to the current £60 billion market cap. Anyone who had held on for the past 15 to 16 sixteen years would have therefore got all of their investment back in cash, and more, and still have a stake in the company’s operations, which are still generating cash. 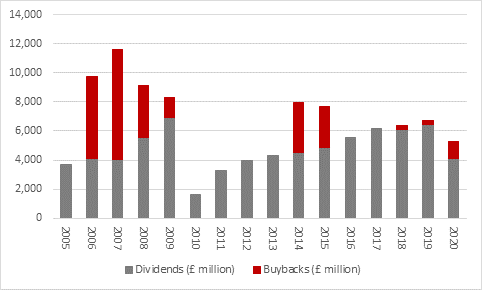 “Perhaps it would therefore be unwise to underestimate BP’s cash-generative powers. Oil may well be with us for a lot longer than many of us expect or would perhaps like and this may yet be an opportunity for investors who place profit over ethics or the environment.

“Yet many challenges lie ahead and that is why BP trades on less than ten times forward earnings and offers a 5%-plus dividend yield, with buybacks on top.

“The oil major is still looking to sell assets at a time when demand for them is not great and recycle that cash into renewable energy assets, where competition for them is fierce. That sounds like a potential recipe for selling low, buying high and destroying shareholder value along the way but more buoyant oil and gas prices could at least help BP get better prices for any hydrocarbon assets of which it wishes to dispose. Some investors may simply take the view that such an approach, while not ideal, is the lesser evil on offer, since the alternative is BP finds itself with stranded, unwanted oil and gas fields or risks effectively losing its licence to operate if it fails to move with the times sufficiently quickly.

“Accepting the last bad option does not feel like a particularly robust investment case, although some of the best capital gains can be made when a company’s fortunes improve from terrible to merely bad or average, as the valuation starting point is usually so beaten down.

“BP could yet fit this profile after 2020’s oil price collapse and the way in which investors have rushed to embrace companies that passed their environmental, social and governance (ESG) test and dumped shares that did not with equal speed.

“Equally, the price of crude could yet retreat again and make BP’s planned transition even harder to effect by depriving it of welcome cashflow.

“But consensus forecasts already expect that, as perhaps does a share price that trades no higher now than it did some 25 years ago (although sceptics will counter by saying the long-term share price decline is no more than a reflection of the future trend in global oil consumption).

“Moreover, the best cure for low prices is low prices, as they stimulate demand and makes alternatives look more expensive. If oil majors are actively discouraged from fresh exploration work at the same time, then the world could yet find demand growth exceeding supply growth, at least in the near-term, and that, ironically, could boost oil firm’s profits and leave their shares looking temptingly cheap.”