A 3% increase in net asset value, a 3% dividend increase for the year just ended and a planned identical hike for the year just begun are not providing support to British Land's shares as investors continue to focus on the possible impact of Brexit, retailers' woes and the Labour Party's proposed Robin Hood tax upon the FTSE 100 Real Estate Investment Trust.
17 May 2017
Share:

“To confound the market’s worst post-Brexit fears British Land increased its net asset value (NAV) per share in the second half of its financial year by 3% to 915p (which means NAV fell by less than 1% for the year as a whole).

“Demand for British commercial property has clearly remained strong, as evidenced by a 98% occupancy rate and increases in both office and retail buildings’ net asset valuations in the second half of the year.

“The disposal of a 50% stake in the Leadenhall Building, or Cheesegrater, for a premium to the balance sheet valuation also suggests UK assets remain attractive, especially as Canary Wharf and CLS Holdings’ Vauxhall Square development were also sold at or above book value, as overseas buyers used weakness in the pound as a chance to step in.

“This strong trading helped British Land to increase its full-year dividend by 3% to 29.2p and target a further 3% increase in the year just begun to 30.08p. 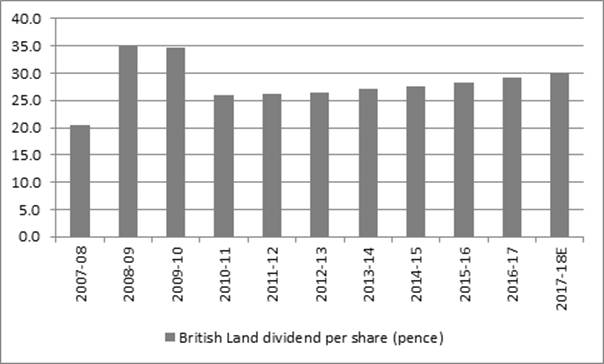 “That latter figure equates to a dividend yield of 4.6%, which may interest income-hunters, although it did slightly undershoot the analysts’ consensus forecast for the dividend of 30.54p.

“This may help to explain why the shares are opening lower today, especially as they have rallied by some 20% from their post-referendum lows of summer 2016 and three issues continue to niggle away.

“The good news is that British Land, as its name suggests, has no exposure here. But 47% of its assets are retail & leisure related, including Meadhowhall, Sheffield, Drake Circus, Plymouth and Glasgow Fort, all sites where retailers are facing the same bricks versus clicks challenge as their US counterparts.

“The question then for investors is whether these dangers are already factored in to a share price which, unlike those of the housebuilders, has yet to recapture all of the ground lost in the wake of the referendum vote.

“At 660p, the shares trade at a 28% discount to net asset value, the highest amongst any large REIT, to suggest the market is already pricing in a lot of the potential risks. In addition, British Land’s balance sheet is much stronger than it was just before the financial crisis struck, so the chances of a repeat in the 78% peak-to-trough fall in net asset value per share between 2007-09 (including the effects of a 2-for-3 rights issue in March 2009) look limited for now.”