Brexit, sterling and inflation dominate policy debate as Bank of England does nothing (again)

Today’s statement from the Bank of England’s Monetary Policy Committee notes that “monetary policy can respond in either direction to changes in the economic outlook” and the 7-1 and 8-0 votes against tighter policy hardly smack of a central bank itching to raise interest rates, especially as the sole dissenter, Kristin Forbes, is stepping down in June.
11 May 2017
Share:

“This may explain why the pound is losing some of its recent gains against the dollar in particular, as the more cautious outlook on consumer spending is a concern.

“The UK economy remains heavily skewed towards consumption and the combination of record high borrowing and a plunging savings rate do question whether the UK’s current growth path is sustainable.

“Total consumer borrowing totalled more £1.5 at the end of March, with mortgages representing £1.3 trillion and credit cards bearing down on the £200 billion mark. Credit card use is still growing strongly although the rate of growth has cooled slightly this year, to perhaps suggest the British consumer is becoming tapped out after a period of strong spending growth, hindered by an increase in inflation. 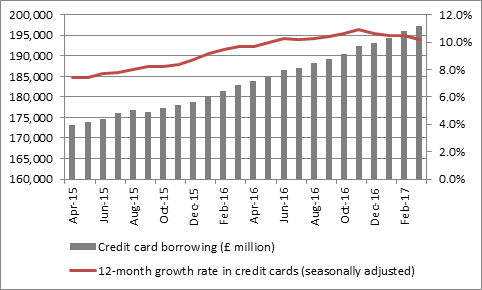 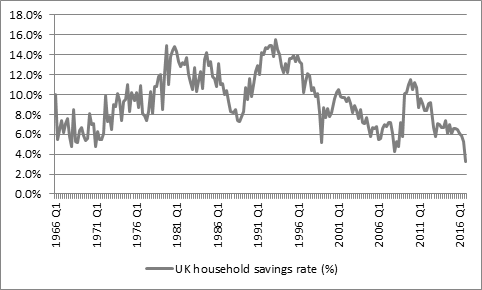 “The central case upon which Bank of England policy is based nevertheless appears to be one whereby economic growth accelerates.

“Governor Mark Carney and the Monetary Policy Committee expect a weaker pound to boost exports and offset an anticipated slowdown in consumer spending as higher inflation (also the product of the weaker pound) hits the wallets and purses of the British public, all helped by an improving global outlook.

“Better momentum in the Eurozone, the UK’s single largest trading partner, would normally be a cause for celebration, although the exact nature of Britain’s future trading terms with the economic bloc may be tempering enthusiasm.

“This may explain the Bank’s decision to leave policy unchanged once more even if today’s statement hints that monetary policy may be tightened more quickly than the Government bond market currently thinks, if economic forecasts prove correct.

“Given the generally over-optimistic tone of growth and inflation forecasts not just from the Bank of England but the IMF and others since the end of the Great Financial Crisis that looks like a big “if,” it must be said.”