“Shareholders in UK-based firms that have exposure to the global silicon chip industry are not having the best of years as it is but investors in firms such as CML Microsystems, IQE, XP Power, Gooch & Housego, Spectris and Renishaw are likely to be even more nervous now after an overnight profit warning from America’s Broadcom,” says Russ Mould, AJ Bell Investment Director.

“Broadcom’s second-quarter results were no worse than had been expected, as sales rose 10% year-on-year and operating profit fell 19%, but management’s guidance for the next six months blew a hole in the ‘second-half-recovery’ theory that is doing so much to keep the Philadelphia Stock Exchange Semiconductor index, or SOX, at such elevated levels.

“Chief executive Hock Tan’s forecasts of full-year sales of $22.5 billion with an operating margin of 14.75%, $1.3 billion of net interest and other financial expenses and a 9% tax charge imply a drop in sales and earnings per share from the first half to the second, which is a marked contrast to the improvement that analysts had been expecting.

Source: Company accounts, management guidance for H2 2019 given alongside Q2 results. *Includes capital gain on disposal. Based on GAAP numbers, which for the whole of 2019 include $5.2 billion of amortisation of goodwill, $2.2 billion of stock-related compensation expense, $820 million of restructuring charges and $240 million of acquisition-related costs.

“Followers of tech stocks may have been prepared for cautionary comments on demand from wireless telecoms customers, given the slower rate of growth in smartphone sales and what Broadcom delicately termed ‘export restrictions on one of our largest customers,’ in light of the USA’s ongoing concerns over the use of kit supplied by Huawei.

“But Hock Tan’s warning that customers are reducing inventory and ordering more carefully for the rest of 2019 will be less welcome, again because its punctures the narrative that a second-half recovery is coming.

“This matters to investors in UK stocks, too.

“Broadcom derives sales from wireless and fixed line telecoms, broadband and industrial clients, may also give investors so it offers a good read on the current state of the global economy – and the impact that American and Chinese tariffs may be having.

“Moreover, it is a constituent of the Philadelphia Stock Exchange Semiconductor index, which traditionally been a good indicator of wider stock market momentum and risk appetite since its launch in summer 1994.

“This is because silicon chips – semiconductors – are everywhere, from cars and computers, from smartphones and tablets, from video games to robotics and from display screens to data centres. As such they are good proxy for economic growth and broader end-market demand.

“The SOX gained 36% between January and its May peak, which was a new all-time high, amid hopes for the second-half upturn only for renewed jitters over Trump, trade and tariffs to knock it back again. 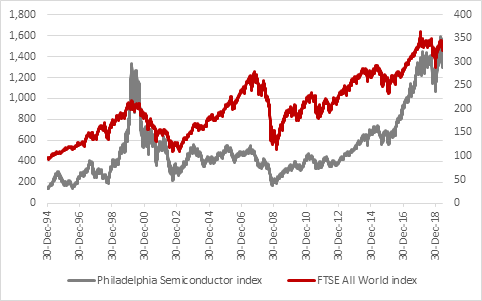 “If there is any good news for UK investors in companies such as IQE, which provide highly specialised chips for the telecoms industry, or firms such as XP Power, Spectris, Renishaw and Gooch & Housego, some of whose sales go into the semiconductor production equipment industry, it is that their share prices have already done a lot worse than the SOX index.

“As such, they may be more attuned to the semiconductor industry’s current woes, not least because Gooch & Housego has already poured cold water on the second-half narrative and Renishaw has released a couple of disappointing trading updates.”