BT bounces as dividend cut looks set to be modest

“You could have been forgiven for thinking that a cut to the interim dividend would be seen as bad news at BT, especially as it comes after an accounting scandal, profit warning and the departure of the chief executive,” says Russ Mould, AJ Bell Investment Director.

“But we may have reached the point where things have got so bad that they can get no worse – and if they can get no worse, then they can only get better, or so the argument goes, especially as the company has lined up a new boss, reached a settlement regarding its pension deficit, embarked upon a cost-cutting programme and sanctioned only a minor cut to the interim dividend.

“The interim distribution was trimmed by just 5% to 4.62p. Given BT’s prior history of dividend cut disasters when things have got tough, it would be a huge step forward if the company can keep the reduction to a fairly modest one. A full-year dividend of say 15p a share (down from 15.4p last year) would put the stock on a dividend yield of 5.7%, on a 260p share price. 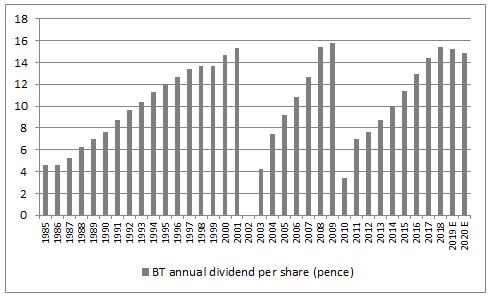 “That could provide some support to the shares, especially as they trade on barely nine times forward earnings – at 260p, the shares are no higher now than they were in November 1996. 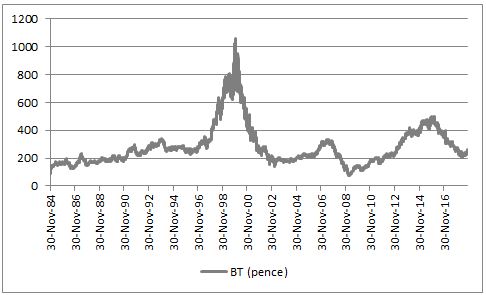 “BT shares could therefore offer some contrarian value, especially as just 10 of the 23 analysts who cover the stock rate it as a ‘buy,’ according to Reuters, but for ‘value’ stocks to outperform they need to offer a catalyst to convince investors that the value can be unlocked and crystallised.

“The interims offer some signs of hope with regard to the day-to-day operations. At 260p the shares are, a

“First-half sales beat expectations, the cost-cutting programme is moving at speed and the company steered earnings forecasts toward the top end of the previously guided range – and you would assume that BT will be careful in how it manages expectations ahead of Philip Jansen’s arrival as chief executive next February, so even this could prove unduly cautious.

“This is not to say the company is out of the woods. It is still hemmed in by the regulator on one side and a fearsome array of competitors on the other, across each of fixed-line, mobile, broadband and content, with customers capable of switching provider if they are unhappy.

“But at least the lowly valuation prices in a lot of the potential bad news while the chunky dividend yield, assuming the dividend cut does turn out be modest and not a repeat of the slashing reductions of 2002 and 2010, offers some compensation for the risks involved with owning the shares.”