“The clearest sign of how Shell is becoming so much leaner and more efficient is how 2018’s $29 billion in operating free cash flow* means the oil major is churning out more cash last year than it did in 2008 or 2011-12 when crude and gas prices were so much higher,” says Russ Mould, AJ Bell Investment Director. As a result, free cash flow covers the $15.7 billion annual dividend payment by 1.85 times, the best level of cover since 2006, to reassure income-seekers that its juicy 6% dividend yield is well supported. 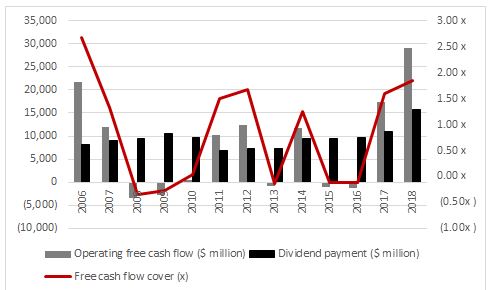 “This is a huge turnaround from early 2016 when Shell was, at certain stages, the highest-yielding stock in the FTSE 100. Investors were driving the shares lower, and insisting on that fat yield as compensation for the risk associated with owning them, because of fears that Shell might have had to cut its dividend for the first time post 1945.

“Shell’s copious cash flow should put such fears to rest now, especially as the company set out its stall in 2016 to make sure that it could cope with $50 oil – and that included making the $50 billion BG acquisition work at that price, too.

“A program of cost cuts, operational efficiencies and lower capital investment is therefore paying off handsomely, especially as Shell received an average price of $63.85 a barrel for its oil (and $5.13 per million standard cubic feet of gas in 2018).

“This drive meant that Shell turned a 30% increase in average oil prices received (and a 19% increase for its gas production) into a 78% improvement in operating profit to $39.4 billion.

“That profit figure trails the $50-bilion plus peaks of 2008 and 2011-12, when oil averaged just under and just over $100 a barrel respectively, but Shell generated more free cash flow from the lower profit as it reined in expenditure. 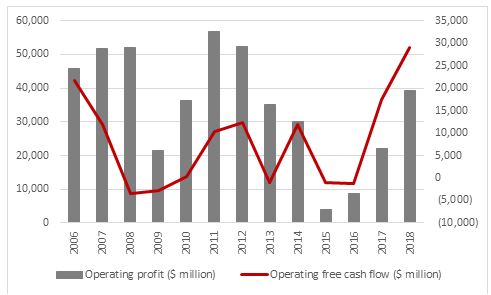 “This should ease any residual fears about Shell’s dividend of $1.88 a year, especially as the company now feels sufficiently flush to maintain that distribution, pay down debt and run its first share buyback scheme in since 2015 all at the same time.

“Shell’s current dividend yield of 6.0% may catch the eye of income-hunters, even if it is now only just enough to put the stock in the 25 highest-yielding stocks in the FTSE 100. That may be a comment about the risks that investors feel are associated with other firms in the index but it is also compliment to the changes made by Shell’s management since the difficult days of the 2015-16 oil price collapse, which has enabled the company and investors to maximise the benefits of the subsequent upturn.

“If there is a question mark to emerge from the results it concerns production. Even after the acquisition of BG, Shell’s total hydrocarbon production (oil plus gas) averaged 3.67 billion barrels of oil equivalent per day in 2018 – just 6% more than in 2006.

“Shell’s cuts to capital investment are allowing it to reap plenty of cash flow but it must be careful to keep sowing and seeding new projects so it can make new finds and replace the oil and gas it is producing, to ensure that future cash flows remain as strong and the company’s competitive position as a leader producer and refiner does not come under any threat.”