“Desert Crown easily won the Derby on Saturday to establish himself as one of the leading racehorses of the UK’s 2022 Flat season but the big race’s sponsor, Cazoo, is looking less and less like a thoroughbred with every passing day,” says AJ Bell Investment Director Russ Mould. “The company is yet to turn a profit, its shares are down by 87% since last August’s stock market listing in New York and now the online car retailer is laying off staff, which is not really what growth companies are supposed to do.

“Growth companies are supposed to, well, grow, but Cazoo is now moving into retrenchment mode, as it cuts 15% of its staff in a bid to save £200 million.

“This is all a long way from last summer’s listing at $10 a share when Cazoo joined the New York Stock Exchange via a merger with a Special Purpose Acquisition Company called AJAX I, which had previously listed on the NYSE in late 2020 when SPACs were still all the rage.

“The deal gave Cazoo a stock market valuation of $7 billion, a figure which anyone who backed the deal in haste will now be repenting at leisure. 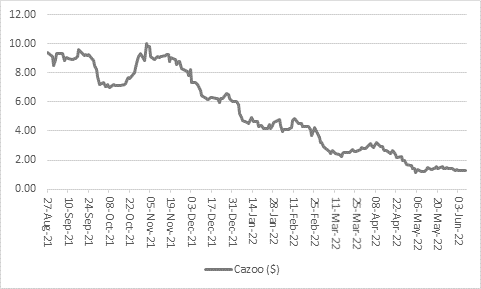 “Cazoo has failed to turn a profit, despite a surge in demand for cars – and especially for used cars as supplies of new ones have been held back by shortages of silicon chips – and its IPO never really got going either. 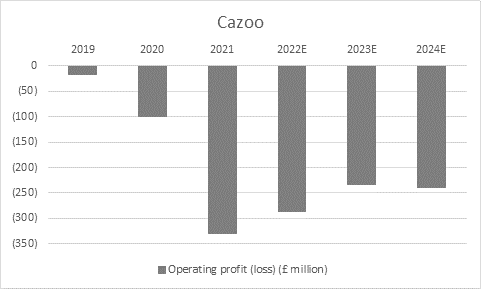 “That did not seem to matter when stock markets were roaring higher, stimulus cheques and furlough payments were filling consumers’ pockets and money was as cheap as it had ever been, thanks to record low interest rates and Quantitative Easing (QE). It almost didn’t seem to matter whether a business lost money or not, as investors bought into the story that the more money a firm lost now, in a land grab for customers, the more profit it could make in the future as it monetised those hard-won clients.

“But the mood music has changed. Endless losses are not enough to support lofty valuations – Cazoo’s initial market cap was the equivalent of more than seven times the sales it generated in 2021 – and rising interest rates and bond yields mean investors are treating their capital with greater care.

“Rising interest rates also increase the discount rate used in the discounted cash flow (DCF) models used to value companies that are loss-making today but offer the promise of profits well into the future. And a higher discount rate decreases the net present value (NPV) of future cashflows and that in turn decreases the theoretical value of the equity, and thus the share price.

“Perhaps investors could have seen the smash coming, because US-traded peers Carvana and Vroom have also never made it into the black either and their share prices have skidded horribly, too, despite soaring used car prices and volumes in the USA.”