Is a central bank liquidity drain to blame for market wobbles, rather than the Delta variant?

“Many investors are familiar with the saying that ‘markets like to climb a wall of worry,’ but few are less well versed with the opposite which is they ‘slide down the slope of hope.’ That is what may be happening right now as markets fret about the Delta variant and whether it could stop the global economic recovery from developing as quickly as the near-40% rally in the FTSE 100 from its lows would demand,” says AJ Bell Investment Director, Russ Mould. “But another factor could be at work (besides the traditional light volumes and case of blues which can dog markets in summer), and that is central bank policy, because some leading monetary authorities seem to be draining liquidity rather than supplying the tidal wave of cheap money which, many argue, is a prime reason why asset prices are rising despite the difficult backdrop.

“The Bank of Canada has cut back the scope of its Quantitative Easing programme for the third time, the Reserve Bank of Australia has also eased the rate of asset purchases and New Zealand has stopped buying assets altogether. None of them are going as far as shrinking their balance sheet, but they are growing them more slowly or, in New Zealand’s case, finally holding it in check.

“Even the US Federal Reserve is getting in on the act. The American central bank is using reverse repos in vast quantities, even as it continues to run QE at $120 billion a month, with the result that it is siphoning liquidity away from the financial system with one hand even as it pumps it in with another. 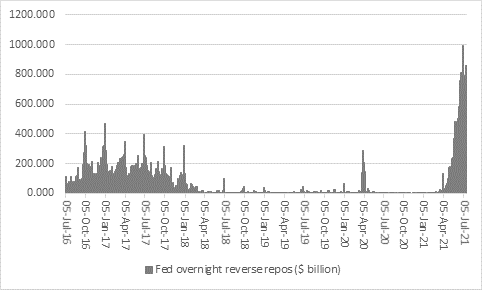 “Without wishing to get too technical:

•    A repo (or repurchase agreement) sees a financial institution sell Government bonds (in this case US Treasuries) to another one, either a bank or central bank, on an overnight basis. It then buys them back the next day, usually as a slightly higher price. The idea is the seller can raise immediate liquidity if they happen to need it. (It also enables the counterparty to make a financial return pretty much without risk, given the extremely short time horizon involved and the collateral that backs the trades).

The repo rate spiked suddenly in the USA in autumn 2019 in what was seen as a sign that the Fed’s then Quantitative Tightening plan (of raising rates and withdrawing QE) was working well – so well that banks were scrambling for cash as the financial system began to creak. Under Jay Powell, the US central bank backtracked on QT and – as the pandemic hit – cranked up QE to ever-more dizzying levels in 2020. That tidal wave if liquidity mean the US overnight repo rate is 0.07% - down from that panicky 6.9% one-day spike two Septembers ago. 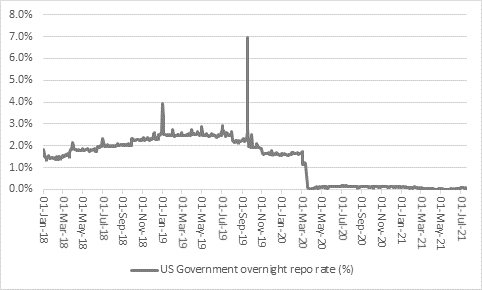 •    A reverse repo (or reverse repurchase agreement) a bank or central bank sells Government bonds in exchange for cash to a range of counterparties, over a pre-determined timeframe (often overnight). This therefore drains cash out of the financial system, at least if a central bank is doing it and the Federal Reserve is hard at work here right now. At the last count, the Fed’s outstanding reverse repo liabilities were $860 billion, the equivalent to more than seven months’ worth of QE. 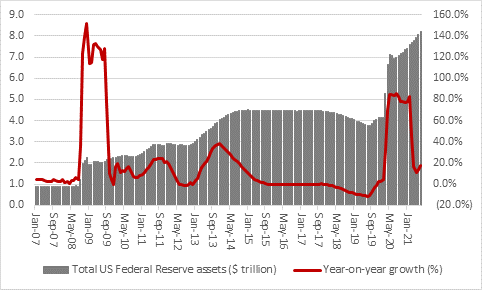 “In many ways it is hard to talk market talk of the Fed turning hawkish seriously – the dot plot of two quarter-point rate rises from a record-low by the end of 2023 is more like a budgie clearing its throat for a quick chirp rather than a vicious swoop from a bird of prey.

“But perhaps the US Federal Reserve is laying the groundwork for tightening monetary policy after all and taking these initial steps to test how financial markets (and the economy) will react.

“For the moment, there is no sign of financial stress anywhere in the system, at least according to the tried-and-tested St. Louis Fed Financial Stress and Chicago Fed National Financial Conditions indices. Both are trading very close to their all-time lows. 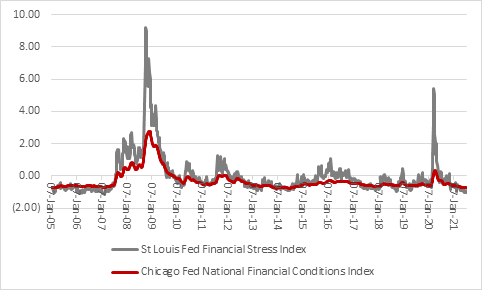 “The S&P 500 still trades close to all-time highs, so again the Fed will be hoping the turn in the liquidity tide does not rock too many boats here. A spike in the VIX and the stumble in the S&P will leave Fed officials on alert, though, as autumn 2019’s repo rate spike saw WeWork’s much-hyped flotation fall apart, Bitcoin sink 25% in a month and wider equity and bond markets both get the jitters, albeit very briefly.” 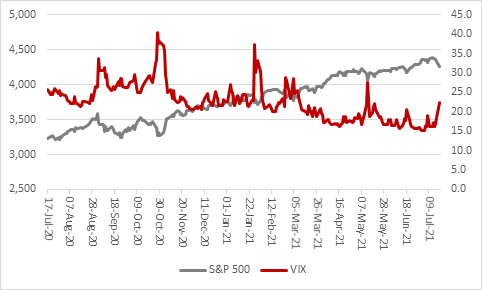