Cigarettes, alcohol and package holidays: how spending patterns change as we get older

•       Official data reveals how spending patterns shift as people enter retirement (Source: https://www.ons.gov.uk/peoplepopulationandcommunity/personalandhouseholdfinances/expenditure/datasets/detailedhouseholdexpenditurebyageofhouseholdreferencepersonuktablea11)
•       Cigarettes and alcohol among the items older people tend to spend more on than their younger counterparts
•       Over 65s more exposed to energy price rises as a proportion of their income
•       Unsurprisingly, those aged 65-74 spend more on package holidays than any other age group

“People’s spending patterns fluctuate throughout their working lives and into retirement, reflecting shifting priorities as we grow older.

“Former Oasis frontman Liam Gallagher was in his twenties when he complained his search for ‘action’ only led him to cigarettes and alcohol, but it turns out those aged 65-74 are more likely to splash the cash on fags and booze than most other age groups.

“On average those aged 65-74 spend just over £550 a year on alcoholic drinks, equivalent to £10.60 a week. That’ll buy you a decent bottle of plonk or a couple of four-packs of lager every weekend.

“Perhaps unsurprisingly money spent on alcohol away from home tends to fall as we get older, suggesting a big night on the town for many is replaced by a more frugal – and potentially quieter - night in.”

The rising (relative) cost of heating our homes

“Retired households are significantly more exposed to shifts in energy and fuel prices than their younger counterparts.

“The cost of heating your home tends to remain relatively unchanged throughout someone’s life, but represent a far bigger proportion of expenditure for retired households.

“Average annual bills for over 65s were north of £1,100 in 2017/18, representing almost 5% of the average retired person’s income. A non-retired person would face broadly similar energy costs but with their income higher, the impact of any price changes would be lower.”

“Thankfully retirement is about more than drinking, smoking and worrying about your fuel bills, with those who have just reached state pension age spending around £1,700 a year on package holidays, more than any other age group.

“That could buy a week all-inclusive in the Canary Islands for two people in a 4* hotel or a 7-night cruise round Spain and Portugal.

“By comparison, those aged under 30 spend just £700 a year on package holidays while the 30-49 age group splurge just under £1,300 a year – although this might reflect the fact younger people are more likely to arrange their own trips rather than opt for a package deal.” 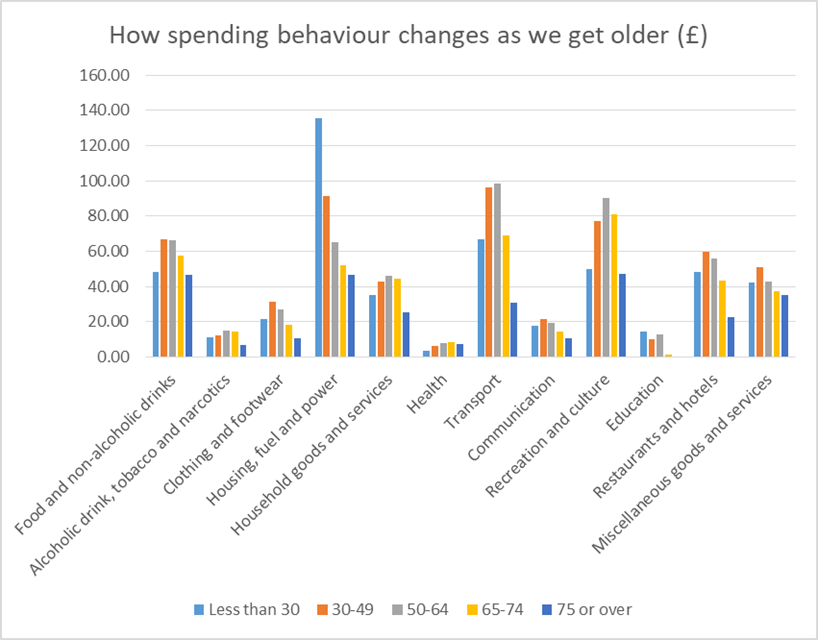