Cladding remediation bill hits £1.2 billion as Redrow is the latest to take the pledge

“Redrow’s announcement that it is setting aside an extra £164 million to cover remediation work on fire safety for tall buildings, alongside its signing of the Government’s Developer Pledge, takes the FTSE 250 firm’s bill to £200 million and the total cost to the big nine listed housebuilders to £1.2 billion – and Berkeley has yet to quantify its potential bill,” says AJ Bell Investment Director Russ Mould. “Minister Michael Gove and unhappy householders may be pleased but shareholders may not be too perturbed as those nine firms had £5.5 billion in net cash on their balance sheets at the last count and analysts expect them to rack up an aggregate operating profit of more than £5 billion in their current financial years.

“The big, listed builders had already set aside provisions for £739 million, although a portion of Barratt’s costs include the troubled Citiscape building in Croydon, which dates back to 2003.

“Between them they now plan to set aside another than £450 million, based on outlook statements made alongside their last published results or this week’s updates from Redrow, Crest Nicholson, Taylor Wimpey, Berkeley and Persimmon, when they signed the Department for Levelling Up, Housing and Communities (DLUHC) building safety pledge.

Source: Company accounts. *Based on mid-point of any guidance range provided by management. ** Berkeley has yet to provide any figures. *** Barratt Development provisions also include costs for Citiscape building in Croydon.

“The builders’ net cash pile will help them take the hit, as will their ongoing profits, which are expected to return to peak, pre-pandemic levels in 2022, buoyed by the combination of increased completions and higher selling prices. 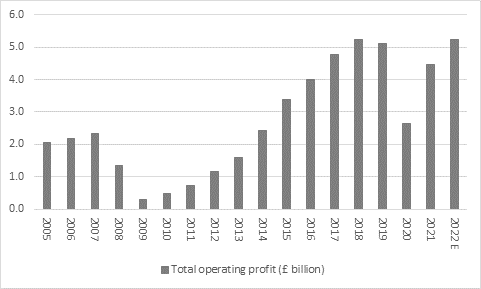 “However, the builders’ share prices are now showing much by way of a relief bounce, even if the current cladding remediation bill looks affordable.

“This may reflect wider concerns over rising interest rates, a narrowing of the Help to Buy scheme, the end of the stamp duty tax break, the cladding tax and a possible economic slowdown thanks to higher energy prices in the wake of the Russian invasion of Ukraine.

“The builders continue to aggressively buy land so they seem confident that the good times will continue to roll, as do analysts, judging by their profit forecasts and also expectations that the listed builders will pay out some £2.5 billion in dividends between them in their current financial years. 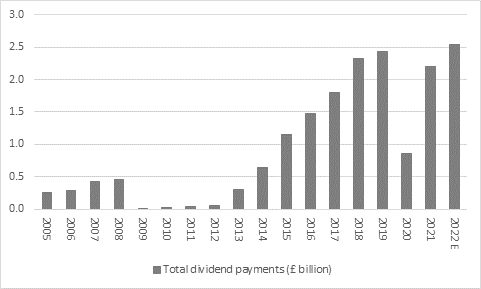 “The builders seem confident that efficiency programmes and price increases will help them to offset the effects on input cost inflation but their recent share price slides suggest the market is not so sure – and see you can see why, if prior episodes of lofty inflation and rising interest rates prove a reliable guide this time around, although there is no guarantee that history will repeat itself.

“Barratt Developments is a good proxy for the sector here, as its shares first began trading on the London Stock Exchange in 1968, so the firm has been through the Barber boom and bust of the early 1970s; the inflation (or stagflation) of the 1970s; the mid-teens interest rates and then the Lawson boom and bust of the 1980s; the recession of the early 1990s and then a recovery; the boom of the early 2000s; the Great Financial crisis and collapse of demand; and then the last decade of madness where money has cost almost nothing and the Government has been doing everything it can to stoke demand but not supply. 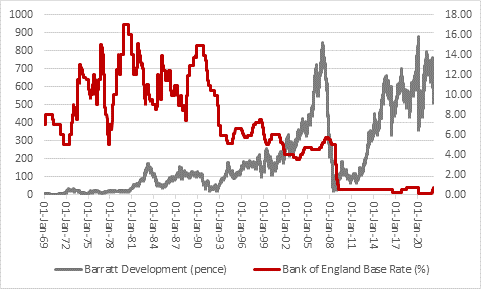 “The benefits of ultra-loose monetary policy, and therefore ultra-cheap money for the last fourteen years, for Barratt’s share price and its investors seems pretty clear, although even frantic interest rate cuts initially failed to stem the tide in 2007-08. If there is a downturn coming, at least Barratt and its peers have net cash piles to protect them this time, rather that debts and interest payments to service even.

“Even then, any downturn may not bring much joy to shareholders. Barratt’s investors gleefully rode the Barber boom in the early 1970s but then they came a massive cropper as higher inflation, thanks in part to 1973-74’s oil price shock, and higher interest rates, designed to both cool inflation and an over-stimulated economy, hit home. Anyone unlucky enough to buy Barratt shares at their peak in April 1972 didn’t get their money back until 1980 – and that was in nominal terms, let alone real, inflation-adjusted ones. 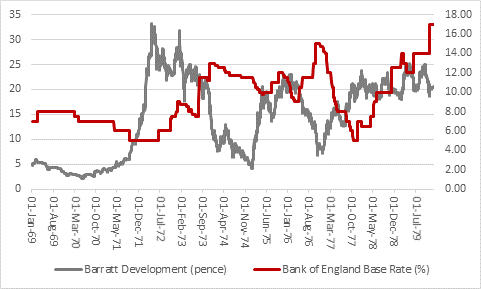 “Lower interest rates helped in the early 1980s and only efforts to cool the economy in the later stages of that decade slowed down Barratt’s shares, as then Chancellor’s initial over-reaction to the 1987 stock market crash put the UK into overdrive and forced a speedy tightening of monetary policy. Again, higher interest rates eventually began to take their toll. 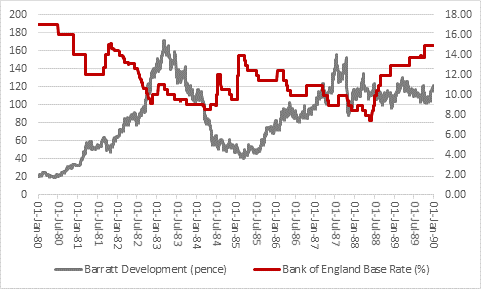 “Conversely, a consistent drop in interest rates in the 1990s, as inflation receded in the wake of more than a decade’s worth of high interest rates and the entry into the global economy of cheaper Eastern European labour after the collapse of the Berlin Wall, made that decade a good one for Barratt and housebuilders. 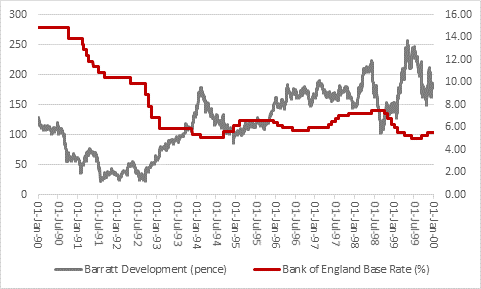 “The direction of interest rates and inflation are therefore crucial for shares in Barratt and the other housebuilders going forward. Too much inflation could crimp both consumers’ ability to buy and builders’ profit margins if input costs surge, while inflation would also potentially bloat the nominal value of builders’ land values and assets, squashing returns on capital employed in the process.

“Interest rates that are too steep could again cool the market as mortgages prove more expensive and difficult to service, especially inflation runs ahead of wage growth.

“The Bank of England therefore has a tricky balancing act, and it may now be policy in Threadneedle Street, rather than Michael Gove’s DLUHC department, that has the biggest say in where housebuilders’ shares go from here.”