“Full-year results from Derwent, with its focus on offices in the nation’s capital, show a further increase in both net asset value per share and the dividend.

“By contrast Leeds-headquartered Town Centre, which has a greater emphasis on retail and leisure in the North of England, offers a drop in net asset value and an unchanged dividend.

“The stark contrast in the results, which appear to be largely the result of their different exposures both geographically and in terms of end-customer, in turn explain the different valuations attributed to the two stocks by investors.

“Derwent trades at a modest discount to net asset value of 13%. By contrast, Town Centre trades at a discount of 40%.

“Derwent today affirms that demand remains strong and vacancy rates near historic lows, even if Brexit and the related political and economic uncertainties mean would-be occupiers are proving selective when it comes to their choice of site and city – a trend which may favour the company’s portfolio, which has existing assets or development properties in Soho, Fitzrovia, Mayfair, Holborn and Clerkenwell, among others.

“Town Centre’s management pins the drop in NAV per share on one-off factors, notably a loss on a property disposal and in fairness such asset recycling is key to the strategy outlined by key shareholders the Ziff family, who continues to continues to buy, sell and re-purpose the portfolio.

“Sixty per-cent of Town Centre’s assets are in Leeds, with 15% in Scotland, 13% in Manchester and 8% in London.

“As of June 2018, offices represented 18% and hotels and car parks 7% each, with residential 3% but it is interesting to see how this mix is changing markedly across Town Centre’s new developments, which represented 9% of the portfolio as of last summer’s financial year end.

“However, that 40% discount to the historic net asset value per share figure of 361p suggests that the Ziffs have more work to do if they are to convince shareholders that the discount will be closed by a rising share price rather than a drop in the value of Town Centre’s assets.

“The company’s NAV per share did fall by 41% from peak-to-trough between 2006 and 2009 when the financial crisis hit and the UK fell into recession, after all, and it has yet to return to pre-crisis peak levels. 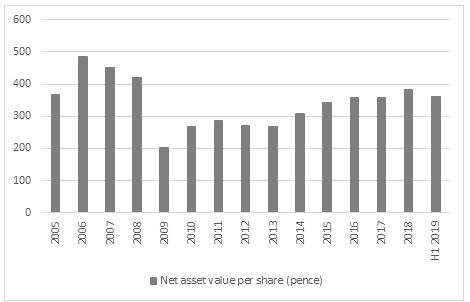 “Derwent, also helped by a more conservative balance sheet with lower levels of debt relative to the value of its property assets and shareholders’ funds, has long since set new record-highs for net asset value per share.” 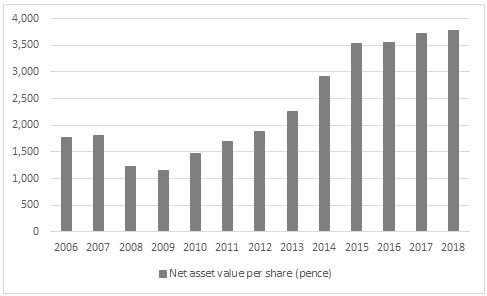