Do silicon chip shortages mean the global economy is really motoring again (and if so, what are the best ways to play the upturn)?

“Any industry that can point to 8% compound annual revenue growth over a span of 40 year must be doing something right and the global semiconductor business is back in focus again as car makers confront disruption to production caused by a shortage of silicon chips,” says Russ Mould, AJ Bell Investment Director. “The semiconductor industry is notoriously boom and bust but it grew in 2020, despite the pandemic and global recession, and industry forecasts suggest it poised to do so again in 2021, especially if the virus is beaten off and economic activity picks up. From the narrow perspective of financial markets, this leaves investors with three issues to address:

•    Do the car industry’s chip woes suggest that the overall semiconductor industry is primed to boom in 2021?

•    If so, are there are any ways of playing this through UK-listed stocks?

•    Does the chip shortage have wider potential implications, such as the return of inflation?

“The silicon chip industry’s sales fell in 2019 but are forecast to have grown by around 5% in 2020 to $433 billion, thanks to increased demand for laptops, personal computers and mobile devices from workers who were locked down and for servers as more and more data, content, information and shopping went online. Industry estimates peg growth forecasts for 2021 at around 8%, smack in line with the long-term compound annual growth rate, with COVID-19 a major variable in any estimate. 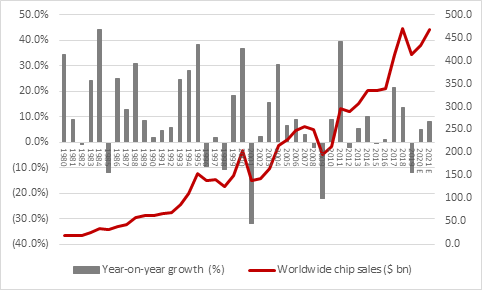 “The global car industry generates around 10% of total semiconductor sales so a rebound in auto sales will not, on its own, stoke a fresh chip industry boom – but it could help and some investors do seem to think that good times lie ahead, since the Philadelphia Semiconductor Index, known as the SOX, is trading only a fraction below the 26-year-old index’s new all-time high set earlier this month in the wake of 2020’s rip-roaring gains. 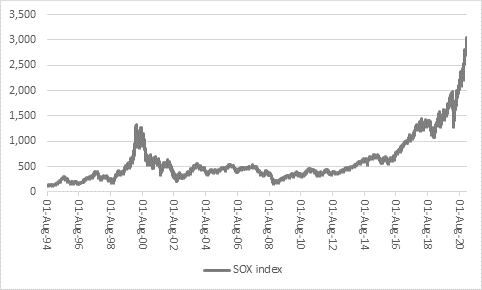 “There are multiple possible reasons for the current shortage of key components, which is forcing cutbacks in output and plant shutdowns in the UK, Europe, Asia and America, with Honda, Audi, Toyota, Audi, Ford and Fiat-Chrysler all flagging difficulties grabbing sufficient chip supply.

“One is President Trump’s economic campaign against China and the imposition of export curbs on SMIC, China’s leading silicon chipmaker. This is forcing buyers to scramble for alternative sources of supply at a time when demand from other industries, such as personal computing, consumer electronics and telecommunications (thanks to the roll-out of 5G), is also calling on chipmaking capacity.

“Another is the long lead time in building new silicon chip factories, where a state-of-the-art facility can cost in excess of $3 billion, or even in retooling existing semiconductor production, assembling and packaging and testing facilities so they can switch from one product to the next.

“And another, in the case of the auto industry, is the potential rebound in demand in 2021, at a time when the number of chips and amount of silicon per car is already on an inexorably upward trend. According to Germany’s Infineon Technologies, the leading manufacturer of chips for the car industry, traditional areas of demand such as engine management, power steering, airbag control and braking are now being joined by infotainment, cameras, sensors and now the rise of electric and driverless vehicles.

“No doubt silicon chipmakers will respond by adding fresh capacity and global demand for semiconductor production equipment (SPE) is forecast by industry expert SEMI to grow in again in 2021, even from 2020’s all-time high level of nearly $70 billion. Here lies a hidden danger, as chip industry booms turn to busts either because an unexpected recession mean that demand disappoints or manufacturers ultimately swamp demand with too much supply.”

2.    Are there are any ways of playing a chip industry upturn through UK-listed stocks?

“Investors must first consider whether a rapid upturn is likely especially as the American SOX index is already 56% higher than it was a year ago and thus factoring a fair amount of good news already. Any disappointment could lead to some share price woe for the constituent of the 30-stock benchmark, whose members predominantly hail from the US but also Asia and Europe.

“Nor is it easy for investors who wish to load up on chips to do so via the UK stock market. ARM was the UK’s only member of the 30-stock SOX index for many years and most of that benchmark’s constituents still hail from the USA, with the Netherlands’ ASML and Taiwan’s TSMC notable exceptions.

“ARM is currently owned by Japan’s Softbank (although America’s NVIDIA is looking to buy it) and after the takeovers of Wolfson, ARC, PureWafer, CSR and others the UK’s stock market is not blessed with silicon riches. Those firms that are listed may not offer much by way of automotive exposure, either.

“CML Microsystems is a specialist in radio frequency chips for communications, IQE manufacturers the specialist epitaxial wafers from which semiconductors for 5G telecoms can be cut and Concurrent Technologies provides printed circuit boards for Intel microprocessors, so none of them offer direct exposure to chips for cars.

“Instead, investors will have to look overseas. Frankfurt-listed Infineon is the world’s biggest supplier of semiconductors to car manufacturers, followed by US-listed NXP, the Tokyo-traded Renesas, another US stock in the form of Texas Instruments and then STMicroelectronics, which trades on the bourses of both Paris and Milan.

“Nor is the UK overly blessed with direct exposure to the SPE industry. Judges Scientific and Oxford Instruments both provide equipment for certain parts of the chipmaking process, as do fellow precision instrument makers Spectris and Renishaw, although they are relatively small units overall within those firms. Nevertheless, Spectris and Renishaw could be said to take some sort of lead from the SOX index, as strong – or improving – momentum in chip sales could point to better news more generally for the global economy and financial markets and thus demand for capital equipment more generally. 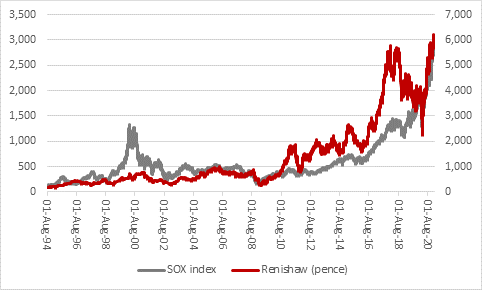 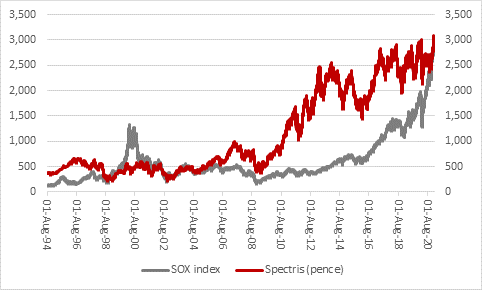 “The major specialist SPE plays can be found in the form of the Netherlands’ ASML, which has a formidable market position in the key area of photolithography, as well as the Americans Applied Materials, LAM Research, KLA-Tencor and Japan’s Tokyo Electron and Advantest.

3.    Does the chip shortage have wider potential implications, such as the return of inflation?

“Only time will tell whether chip shortages lead to sustained price increases for the components themselves and the end-products which rely upon them so heavily but financial markets are becoming more preoccupied with the possibility that inflation could be about to make a return, some 40 years after US Federal Reserve chairman Paul Volcker set about squeezing it out of the global financial system. 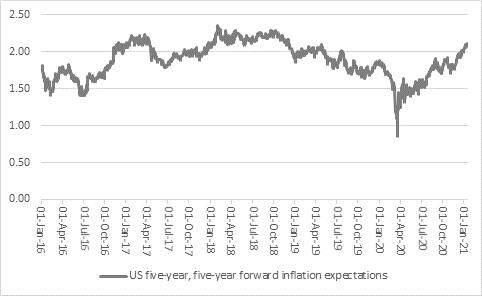 “The five-year, five-year forward inflation expectation in the US now stands at 2.11%, its highest level since December 2018, and financial markets are beginning to react: bond yields are ticking higher, Bitcoin is going bananas while gold holds relatively firm and within equity markets cyclical growth (or ‘value,’ for want of a better word) is again trying to cast of a decade of underperformance relative to perceived secular growth sectors such as technology.

“Rising unemployment is a strong counter-argument to thesis that calls for higher inflation, and a sustained inflation would still be a huge surprise to many should it develop, especially after more than a decade of low growth, low inflation and zero interest rates. The playbook for investors in this environment has been straightforward: buy long-dated assets, buy bonds, buy equity growth (such as tech), and forget commodities, forget equity value, and forget emerging markets.

“If we do get any inflation – and it is by no means guaranteed given the risk of demand destruction due the pandemic and its wake - then the playbook would potentially have to reverse, at least if history is any guide, and providing we did not return to the galloping prices rises of the 1970s.

“If we got a dose of inflation, then cyclical and value equities, emerging market equities and commodities – all short-duration assets - could all make a comeback at the expense of those long-duration ones like bonds and ‘growth’ equities. Cash would also become a bit of hot potato as well as inflation eroded its purchasing power.

“The battle for portfolio performance supremacy can be seen by comparing the performance of two exchange-traded funds (ETFs) in the USA, the QQQ Invesco Trust, which follows the price of the biggest non-financial stocks on the NASDAQ, and the Russell 2000 Value ETF. 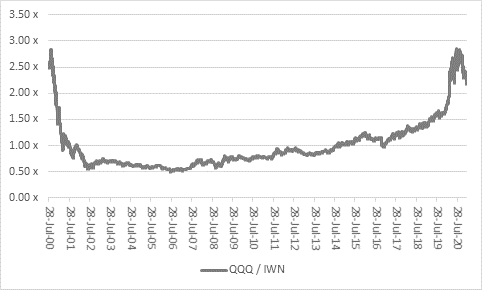 “And if anyone thinks the switch toward ‘value’ since summer 2020 looks big, they need to look at the left-hand side of the chart and check out the violent manner in which tech and growth fell from favour and value returned to it once the tech bubble peaked in 2000.”