Does a £1 million pigeon mean financial markets are about to drop off their perch?

“There’s always one deal – with the benefit of hindsight – that makes everyone nod, then tut finally and say that’s when someone unwittingly called the top of the economic and stock market cycles, by overpaying for a trophy asset. Market-watchers will therefore note the £1 million recently paid for a Belgian racing pigeon called Armando by a Chinese buyer with some concern and ask whether such a lofty price is the signal this time around,” says Russ Mould, AJ Bell investment director.

“No-one ever rings a bell to signal that it is time to get out but there are always deals that have people cooing at the time and cursing later on and the last cycle, which ended with the Great Financial Crisis, was no different.

“In 2006, a two-year old thoroughbred racehorse, later nicknamed The Green Monkey, was sold for a record auction price of $16 million at Calder in Florida. It subsequently proved to be slow on the track, failing to win in a brief three-race career in America, and unsuccessful as a stallion.

“In 2007, Dubai World bought the QEII luxury liner for $100 million only for the Emirate to be engulfed by a financial crisis in 2008-09, which it managed to weather through a combination of restructuring its banking system and key enterprises, as well as targeted infrastructure spending.

“In the same year, Damian Hirst unveiled his For the Love of God sculpture, a skull covered in more than 8,000 diamonds, which was sold for $100 million.

“There was also rampant merger and acquisition boom that culminated in disastrous $45 billion purchase of Texan energy utility TXU by KKR and Texas Pacific.

“All of these examples seemed normal at a time when economies were humming, stock markets soaring, money was cheap and confidence was high.

“Barring perhaps the confidence element – and we do seem to be missing the exuberance of 12 years ago – similar conditions are in place today, especially with interest rates still anchored at or near record lows and stock markets in many cases at or within touching distance of record highs.

“The aggregate market capitalisation of the MSCI All-Country World Index (ACWI), which includes large-to-small cap stocks from 47 developed and emerging markets, is just a touch below last year’s peak of around $60 trillion.

“Of course the £1 million pigeon does not necessarily mean we have reached the end of the cycle but it may just give investors cause to worry whether financial market valuations are primed to fall off their perch once more.” 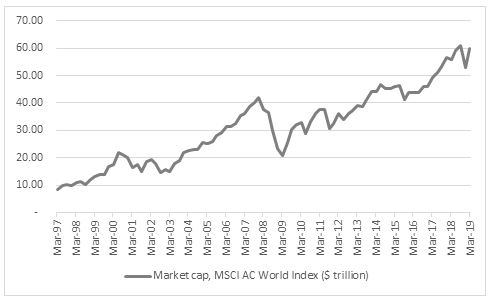