DS Smith hits all of the right buttons with plastics sale

“First, DS Smith is addressing long-term environmental concerns over the use of plastic and focusing on sustainable sources of packaging. Second, the company is reducing its debt pile to reassure investors who feared it may have taken on too much borrowing and overstretched itself with the £1.5 billion acquisition of Spain’s Europac. Lower debt means less risk and lower interest payments. They in turn can mean higher earnings and potentially a higher rating for the stock, giving the share price a double boost.

“The Europac deal has clearly niggled investors ever since its announcement on 4 June – the share price peaked on that very day, as shareholders fretted over the price paid for the target, faced the prospect of stumping up for a £1 billion rights issue and wondered whether DS Smith’s plan to double itself by both size and profitability was the right one. After all, growth is not a strategy – growth is what results from strategy and the creation of a strong competitive position which means customers are willing to pay for the service or products on offer.

“The rights issue covered a big portion of the purchase price for Europac but not all of it and the company must now continue to generate strong free cash flow, an area where its recent record is good. 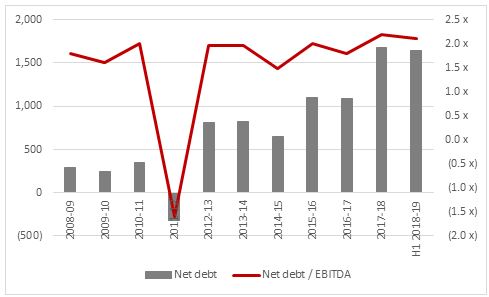 Source: Company accounts. *H1 2018-19 excludes for £1bn rights issue proceeds and does not include £1.4 billion cost of Europac as the deal had not closed.

“DS Smith has nevertheless kept within the 3.25 times net debt-to-EBITDA (earnings before interest tax depreciation and amortisation) ratio stipulated by the terms of its borrowings and banks and management seems confident that the ratio will now come in lower than initially stated alongside the Europac deal.

“The £450 million in cash received from the plastics disposal is a welcome step to reducing the debt, which internally-generated free cashflow will also whittle down. Profits have increased sharply under Mr Roberts’ regime and this has bolstered cashflow, something which is also reflected in the dividend which is much higher now than in 2010 and is forecast by analysts to grow further, even as DS Smith generates earnings per share which cover the estimated dividend per share by more than two times. 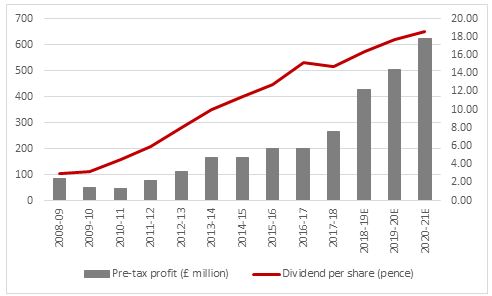 “Even after a recovery from late 2018’s lows, DS Smith still trades on barely nine times forward earnings with a dividend yield of 4.9% on the basis of analysts’ forecasts for 2019-20.

“That reflects concerns over the Europac deal and the associated debt but such multiples do not leave investors as too much of a hostage and offer upside potential if DS Smith keeps on delivering strong profits and cash flow.

“The company has a strong position in its chosen field with a solid base of packaging business from the providers of consumer staples and consumer goods. Nor should the long-term potential of e-commerce be neglected, since containerboard is the corrugated cardboard used by Amazon and other retailers to protect goods as they are shipped to online shoppers, so the investment case comes with a little e-commerce magic dust for good measure.”