“The NYSE FANG+ index is up by 17% so far this year but it peaked in May and after Netflix’s disappointing second-quarter results last week, momentum investors will be looking to Facebook’s first-half figures on Wednesday, Alphabet and Amazon on Thursday and then Apple next week for better news,” says Russ Mould, AJ Bell Investment Director. “However, earnings estimates have risen at only Facebook since the mixed batch of first-quarter results. This apparent loss of forecast upgrade momentum is a concern for a quintet of stocks which have a combined market cap of $3.5 trillion and sport an aggregate forward price/earnings ratio of nearly 28 times for 2019 and 24 times for 2020.

“This slowdown reflects ongoing investment in products services or content, efforts to appease agitated regulators, the impact of fines imposed by the authorities or – in Apple’s case – a slowdown in the smartphone market and hot competition in hardware. The effect of the Trump tax cuts which helped to boost earnings in 2018 is also now wearing off, with Netflix actually noting a big jump in its tax charge this year.

“Although the absence of last year’s $5.1 billion, second-quarter fine from the European Commission at Alphabet will boost profits growth in 2019 these issues mean that analysts expect the five FAANG stocks to generate net income growth of just 3% between them this year. That is not desperately exciting and earnings forecast momentum need to get going again if growth junkies are to stay in love with these names.

“Netflix’s second-quarter subscriber number disappointment provoked a rash of downgrades to estimates and only Facebook is currently generating estimate upgrades of any note.

“This may help to explain why the NYSE FAANG+ index has not joined the S&P 500 and Dow Jones Industrials indices in setting new all-time highs this summer, despite the promise of further monetary largesse from the US Federal Reserve in the form of interest rate cuts.

“Combined sales and operating profit growth slowed again in Q1. The good news is that the rate of increase in free cash flow did accelerate between January and March, even if that was largely thanks to a 15% year-on-year drop in aggregate capital expenditure across the five companies. 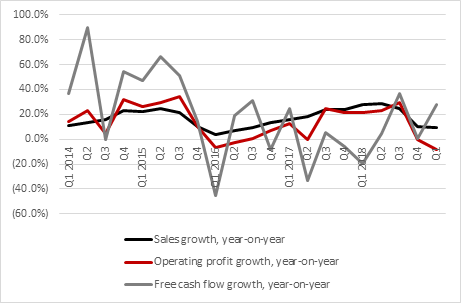 “That combined quarterly free cash flow in Q1 of $11.4 billion helped to top up a $150 billion net cash pile across the FAANGs and the combination of more cash on top of net cash is funding dividends from Apple and meaty buyback programmes at Apple, Facebook and Alphabet. 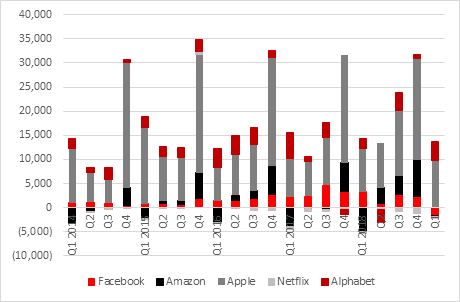 “These cash returns totalled $107 billion in 2018 as a whole, or 3% of the FAANG five’s current market capitalisation, and that may be persuading growth-hunters to be patient and stay loyal during what they may see as a growth blip in 2019. 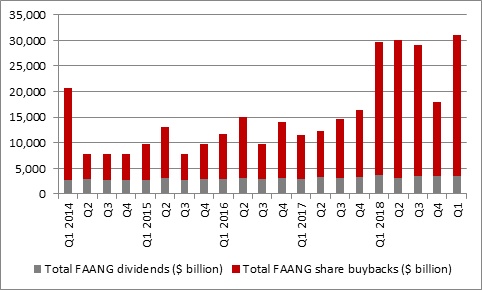 “If investors take those estimates on trust, then the five FAANG names trade on nearly 24 times earnings for 2020 and 20 times for 2021.

“That implies price/earnings growth (or PEG) ratios of 1.4 times for 2020 and 1.1 times for 2021. These multiples may tempt those who feel they are still getting ‘growth at a reasonable price’ with some income thrown in.

“But the burden of proof lies with the FAANGs after what was a difficult end to 2018 and a sticky start to 2019, earnings-wise.

“Investors will be looking to both the second-quarter results, and any guidance for the second half, for reassurance that all five firms are capable of generating the sort of rapid earning growth to which the market is accustomed and upon which their lofty market capitalisations rely.”