“Such a fat dividend yield looks extremely tempting compared to the Bank of England’s 0.75% base rate for cash and the UK ten-year Gilt, where the yield has retreated from 1.26% at the start of the year to 1.02%.

“The dividend yield on offer may be one reason why the FTSE 100 is confounding the bears with a year-to-date gain of 8% in capital terms, despite all of the prevailing political and economic uncertainty.

“The absolute dividend yield – and also the huge premium represented by the equity yield relative to the ten-year Gilt yield – suggests that UK stocks are cheap and a lot of bad news may already be priced in. 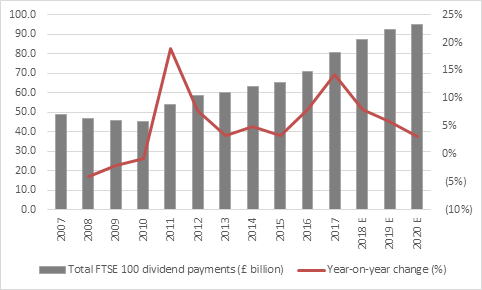 Dividend cover at its highest since 2014

“Buyers of UK-quoted stocks will also draw some comfort from the degree to which company profits cover forecast dividend payments. At 1.68 times, dividend cover is the highest it has been since 2014, although you would really like to see this ratio at 2.0 times or above, to provide a safety buffer just in case here is a sudden and unexpected downturn in trading at a specific company, or indeed the UK and global economies as a whole.” 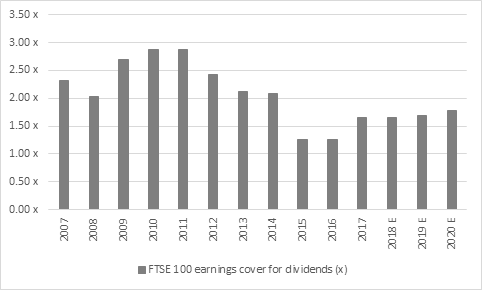 “In terms of the highest yields, the presence of two house builders in the top ten is testimony to the size of their capital return programmes, but it may also hint at investor scepticism that the industry can maintain its current lofty levels of profitability without the benefit of Government assistance, via the Help to Buy and Lifetime ISA schemes. That said, Help to Buy has been extended again so it is possible that these payments are well underpinned, if unwittingly by the taxpayer.

“Of greater concern may be Standard Life Aberdeen, Vodafone and Centrica, where analysts remain concerned over the prospect of a dividend cut, even if all three firms’ management teams are doing their utmost to avoid such an eventuality.

“Vodafone boss Nick Read has already declared that the telecom giant’s annual dividend will be unchanged at €0.1507 a share for 2018, while Standard Life Aberdeen’s Keith Skeoch has said the dividend will come in flat at 21.6p in 2019 as the firm continues to work on getting the best out of the 2017 merger. Centrica’s Iain Conn also continues to target an unchanged payment for 2019, following the cuts of 2014 and 2015.”

“Dividend growth is expected to slow down to 5.8% in 2019 to perhaps reflect tougher trading conditions. That is the lowest rate of advance since 2015, when around a dozen FTSE 100 firms actually cut their pay-outs, including Tesco, Sainsbury, Standard Chartered, Centrica, Rolls-Royce, Severn Trent, Glencore, Anglo American, Fresnillo and William Morrison.

“The announcements of a dividend cut at Marks & Spencer, a plan to leave the annual payment unchanged at Vodafone and the flat pay-out at former serial-raiser Paddy Power Betfair all mean that investors must remain on their guard and cannot take the FTSE 100’s dividend yield entirely for granted.

“It is also notable how reliant dividend growth is on a small number of companies.  Just ten stocks are expected to generate 65% of 2019’s £5 billion forecast increase in total dividend payments, with Royal Bank of Scotland generating a fifth of that sum on its own. Barclays, Standard Chartered, HSBC and Lloyds are also expected to be among the list of the ten largest contributors to dividend growth next year.”

“The combined dividend payment from the Big Five banks is expected to exceed the pre-crisis peak of some £13 billion (although that was forecast for 2018 and they slightly undershot). This makes concerns over the economy, both in the UK and worldwide, particularly important as the full-year results raised concerns over the lack of progress in net interest margins, with HSBC a notable concern here.” 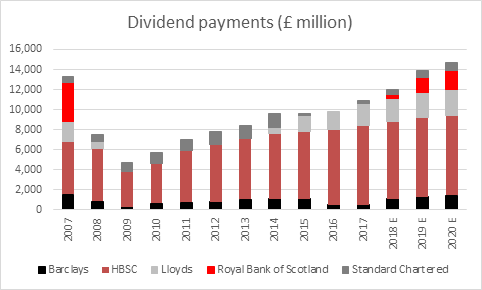