Just as investors had begun to give up on the Federal Reserve following through on its plan to deliver three interest rate hikes this year, the US central bank has pushed through a second rate, reaffirmed its plans for a third and even stated it intends to start to sterilise its huge Quantitative Easing (QE) programme.
15 June 2017
Share:

“This presents the US economy with its next challenge, with headline borrowing costs ticking higher, and it is a further obstacle for US stocks too. Record-low rates and QE have both been seen as drivers of the record run in American equities and the chart which shows an apparent correlation between the size of the Fed’s balance sheet and the S&P 500 index will now be well and truly put to the test: 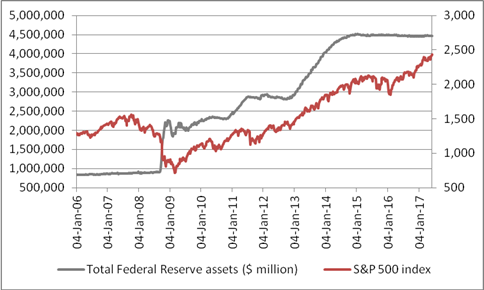 “This scepticism had been fuelled by a string of soft economic readings from the USA, covering housing starts, new jobs, auto sales, durable goods orders and – only today retail sales and inflation. In the latter case, inflation slipped back to an annual rate of 1.9% in May from 2.1% in April, back below the Fed’s 2.0% target.

“However, the US central bank seems undeterred, maintaining its line that the recent softness in economic data is merely transitory, even if its determination to tighten policy increases the risk of a policy error.

“America’s debts continue to rise, be they government, corporate or consumer liabilities, with auto loans crossing the $1 trillion threshold for the first time this year, and the weakening of new auto sales and second-hand car prices may not be a coincidence.

“This suggests the Fed will still have to tread carefully, especially as Janet Yellen and her team now intend to withdraw, or sterilise, QE, by gradually decreasing the amount of interest received on existing bond holdings that is invested in new positions, as the fixed-income securities mature.

“The Fed had previously used the coupons banked to buy new positions to replace bonds which had been redeemed, to keep its balance sheet unchanged.”