“Richard Russell’s Dow Theory argues that for industrial stocks to do well, then transport stocks have to do well first, so investors will be looking with some concern at the weak quarterly results released by freight-and-delivery bellwether FedEx,” says Russ Mould, AJ Bell Investment Director. “The company failed to match expectations that had already been cut and steered profit forecasts lower once again, with the result that its shares fell sharply.

“Within the FedEx Express business, just over half of total sales, international priority sales fell 10.3% year-on-year and international air freight by 18.3%. 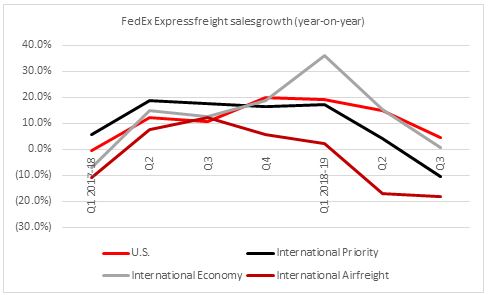 “Although the US generated growth of 4.5%, to suggest that America is still leading the way when it comes to economic growth in the developed West, that was a rare piece of good news and it was not enough to prevent a 1.9% year-on-year decline in freight revenues within FedEx Express or a drop across that segment overall.

“That weakness fed in turn into a marked slowdown in not just sales growth across the group but profits too, as operating income fell quarter-on-quarter back to a level last seen in two years ago, in the quarter ending February 2017. 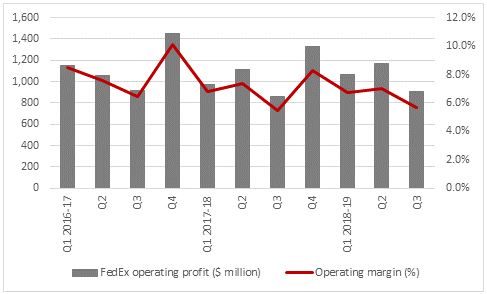 “If this trend persists it may not be good news for either the global economy or financial markets.

“From an economic perspective, it is possible that America’s existing tariff programme, and the threat of further import taxes, are dampening global trade flows, at a time when China’s economy seems to be slowing and Europe’s floundering and the sugar rush created by the Trump tax cuts of late-2017 seems to be losing its impact.

“When it comes to stock markets, this is where Richard Russell’s Dow Theory comes in. the logic here is that it can only be good news if the share prices of the firms moving goods around the world by road, rail, sea or air are doing well. If something is sold, it has to be shipped. Equally, weak transport stocks could mean inventories are piling up on shelves and forecourts, to herald production cuts and a potential downturn in industrial activity, economic output, corporate earnings and potentially stock market valuations.

“For much of 2018 the Dow Jones Transportation index led the better-known Dow Jones Industrials lower, a trend which culminated in a dramatic sell-off in the fourth quarter.

“Both the Transports and the Industrials initially rallied this year but the Dow Jones Transports suffered a torrid losing spell at the turn of March and investors will be hope that this, coupled with FedEx’s third-quarter flop, is not a warning of tougher times to come.” 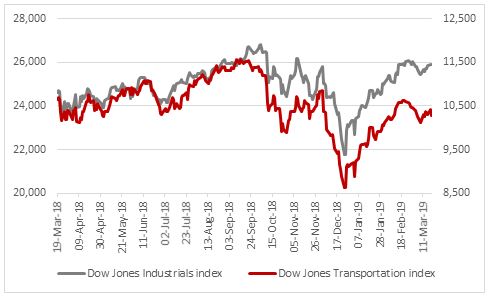