Ferguson benefits from cosying up to Uncle Sam

“Plumber’s merchant Ferguson has stripped itself down over the past few years, first selling its Scandinavian business Stark and then the UK operation Wolseley which once gave the entire company its name,” says AJ Bell Investment Director Russ Mould. “The firm now focuses on the US and Canadian markets and the development of its very own special relationship with Uncle Sam continues to bring benefits to shareholders, including those Stateside who now own stock after Ferguson’s additional listing on the New York Stock Exchange earlier this month.

“The share price is trading close to all-time highs and the company is returning more cash to its investors, in the form of a $0.729-per-share interim dividend, following its return to the dividend list last autumn, and a $400 million share buyback.

“If analysts’ forecasts for a total payment for the fiscal year to July of $2.20 a share in the year tare correct, then Ferguson will have given £4.5 billion back to its shareholders via dividends and buybacks over the past decade – no mean feat for a company whose market cap is £28 billion today and whose stock market valuation was around £6 billion ten years ago. 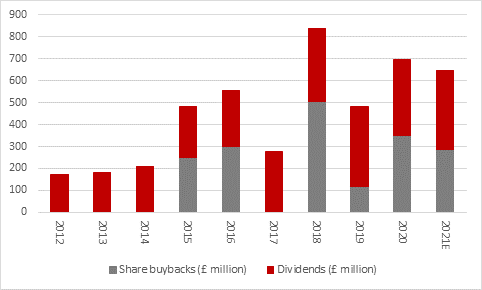 “Such is the power of investing in equities when all goes well. Shareholders who bought in a decade ago effectively paid £1.5 billion to access a firm that is forecast by analysts to generate £16 billion in sales and net profits of £850 billion in the year to July 2021 – a price/earnings ratio of less than two.

“Granted, it took a decade for that maths to work out, but that is why Warren Buffett once noted that ‘The stock market is a device for transferring money from the impatient to the patient.’

“Those who wanted to get rich quick may have cashed out too early, especially given Ferguson’s strong share price performance. Those who were prepared to do their research, ensure they were on to a winner and get rich slowly continue to reap the benefits, to show what investing is really all about – picking a good business (as defined by one with a strong competitive position, robust finances and good governance) and then paying a fair price for it. The competitive position, strong financials and sensible management will then turn into cash which – once reinvestment needs have been met to defend and entrench that competitive position – can then be returned to the investor, to supplement capital returns, be it in the form of ordinary or special dividends or buybacks. 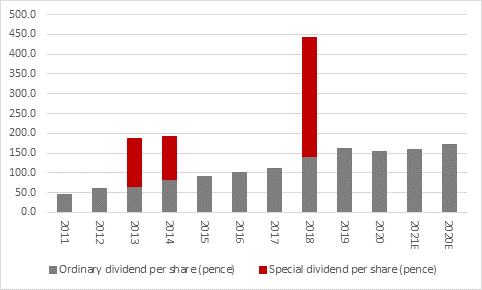 “It will now be interesting to see if Ferguson’s shareholders feel any benefit from the US listing – a move that is financial in nature, rather than one that relates to the underlying business and its competitive position.

Ferguson trades at a valuation discount to US peers Home Depot and Lowe’s and management is clearly hoping for an upward re-rating over time through greater visibility among US investors.

“In the end, however, improved financial performance, consistency of returns,  strong cash flow and the manner in which management conducts itself are all likely to have a far greater say in the rating attributed to the stock, rather than where that stock changes hands.”