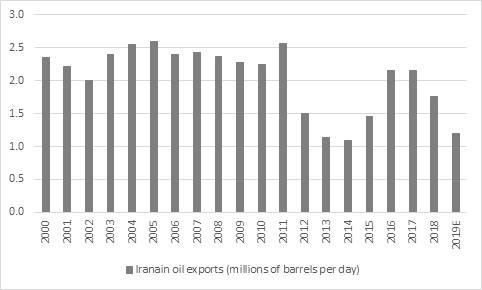 “This helps to explain why crude is rising in price once more, since supply and demand seem to be relatively finely balanced in the oil market.

“How high oil may go could also depend, to some degree, on America. President Trump will have to balance his foreign policy goals with his domestic policy ones, since a surge in petrol prices at the pump could hurt consumer confidence and make it harder for the US to generate the 4% GDP growth rate targeted by the White House.

“The US seems determined to ramp up the pressure on Iran for now. This may be partly in the view that Saudi Arabia and America itself can fill the gap left by the sanctions on Iran and stop oil prices from galloping too much above the $70 a barrel mark, using Brent crude as a benchmark, but for the moment American foreign policy is providing strong support to oil.

“Those investors who think further pressure on Iranian exports, coupled with careful production control from Saudi Arabia (as well as leading non-OPEC members such as Russia) and a benign global economic outlook, will provide sustained gains in the price of oil, there are plenty of ways to get involved, albeit with varying degrees of risk profile.”

> Dedicated energy equity fund.
There are a select number of actively-managed funds which specialise in investing in firms related to the energy industry and oil and oil equipment and services stocks in particular. Guinness Global Energy is one example. Just over 40% of its assets are in US-listed stocks with 18% in Canada, 8% in China and 5% in the UK. The largest individual stocks positions include Chinese giant CNOOC, Texan oil refiner Valero, Italy’s ENI, Austria’s OMV and also British oil major BP.

Another option to consider here is the Legal & General US Energy Infrastructure MLP exchange-traded fund (ETF) (EPIC code MLPX). Listed on the London Stock Exchange, this tracker is designed to provide the performance of a basket of 32 American energy pipeline, storage and logistics firms, a lot of whose share prices have fallen hard alongside the actual oil price. The tracker is SIPP and ISA eligible and comes with an ongoing charge figure of 0.27% a year. Many of the individually quoted stocks within the basket come with juicy dividend yields which could be supported or enhanced if oil makes sustained gains. Do note that this tracker uses synthetic replication to provide performance, so it does not own the 32 stocks which form the underlying Solactive US Energy Infrastructure MLP Index but a wide range of collateral assets which are used as part of a derivative agreement with an investment bank.

> UK equity tracker fund.
The iShares  Core FTSE 100 exchange-traded fund (EPIC code ISF) is big (£6.5 billion in assets), cheap (0.07% total expense ratio) and has both BP and Shell in its top-five holdings list, with an overall weighting toward energy of 17.3%, although it is by no means a pure play.

> Actively managed UK equity fund
One UK equity income fund which already has big holdings in both BP and Shell is Troy Trojan Income – both stocks are top-three holdings with portfolio weightings of more than 5%. Shell also features in the top-five holdings list of MAN GLG UK Income fund.

> Oil tracker
Investors may want to avoid stock specific risk and just follow the oil price. ETFS Commodity Securities ETFS WTI Crude Oil (EPIC code CRUD) tracks the US benchmark, West Texas Intermediate, and ETFS Commodity Securities ETFS Brent Crude (EPIC code BRNT) the equivalent European oil benchmark. Note that both trackers follow a basket of oil futures prices, not the spot price, and both use synthetic replication (derivatives) to achieve this. Besides movements in the oil futures, investors are also exposed to the roll yield and collateral yield for their total return on investment.

BP is already trading near five-year highs, although Shell has yet to recapture the peak it reached late last spring and the higher the oil price goes, the better their profits and cashflows and the more reliable their dividend yields will look.

Their dividends are now far less reliant on selling assets or raising debt, both of which looked like they would have to be a major contributor when oil hit $30 in 2015. Based on consensus analysts’ forecasts for 2019, BP currently offers a 2018 dividend yield of 5.4% and Shell 5.6%, with dividend cover of 1.32x and 1.46x respectively.

Then the riskiest oil plays are the AIM-quoted junior explorers which may not even be producing or have a find, but whose share prices could welcome more positive sentiment toward their industry.

The London Stock Exchange is also host to a select number of firms which provide equipment and services to the oil industry. None of them feature in the FTSE 100, although Wood and Petrofac were both once part of the UK’s elite index. Other names to note include Lamprell and Hunting, although do note they all have different client, geographic and product exposures.