“The old saying ‘markets like to climb a wall of worry’ proved spot on in 2017,” comments Russ Mould, investment director at AJ Bell.
14 December 2017
Share:

“Concerns, over what President Trump may or may not do, North Korea, China’s economy, the Brexit talks and a gradual series of US Federal Reserve interest rate increases were all swept aside as global stock markets moved higher and bonds did not suffer the accident many had feared.

“Yet such optimism could leave investors exposed to the danger of ‘sliding down the slope of hope’ in 2018.

“Markets can be at their most dangerous when making money looks easiest so a selective approach is likely to be best for the year ahead.  It would be unwise to call the top in markets, as timing them precisely is impossible, but for the long-term it makes sense to take less risk when markets are running hot and more when they are running cold, so for the moment some caution may be warranted.”

Five walls of worry for investors to climb in 2018

1.     Brexit talks, the pound and the UK stock market

“Ongoing uncertainty over how the Brexit talks may ultimately pan out, and what they may mean for the broader British economy and the pound, continue to dominate sentiment toward the UK’s equity market. There is perceived political risk as well, in the form of a Government without a majority and an opposition party which is seen as no friend of the markets.

Yet the UK underperformed the FTSE All World in sterling total return terms in both 2016 and 2017 and comes with a currency which looks cheap on a purchasing power parity basis. It may not take much for the UK stock market to surprise on the upside in 2018, especially as the index could derive support from its projected 4.3% dividend yield.”

“Retail stocks are being hammered by fears of the Amazon effect, sticky inflation that is crimping consumer spending power and weak consumer confidence. But several very profitable names are now looking cheap and offer fat dividend yields for good measure and if history is any guide this is one sector which could do well were the pound to surprise by rallying (either as the Brexit talks go smoothly, the Bank of England moves more quickly than expected or something goes wrong elsewhere).”

“Japan is a mystery to many, with a debt-to-GDP ratio that would embarrass Greece, unhelpful demographics and a corporate landscape where 2017’s headlines are dominated by misreporting or accounting scandals at Toshiba, Kobe Steel and others.

“But the political situation is stable, corporate governance is improving thanks to the launch of the JPX-Nikkei 400 index, the economy has just put together its best run of growth in a decade and the headline Nikkei 225 index does not look expensive relative to its history on earnings, not least because it still trades more than 40% below its 1989 peak.” 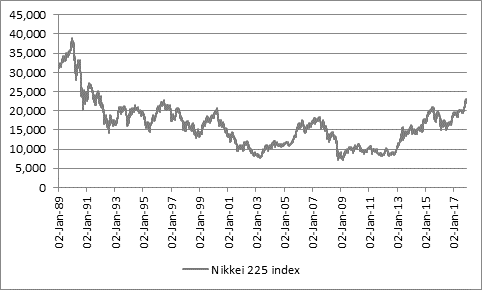 “After several years in the wilderness, Emerging Markets have had two good years, buoyed by improving global growth, a weak dollar and drops in inflation which means interest rates are falling in major countries, not rising as in the West.

“They are still treated with scepticism in many quarters, owing to their commodity exposure (Brazil, Russia) or political risk (Mexico owing to NAFTA talks, South Africa or Brazil again) and this may mean there is selective value to be had. Emerging Markets overall are not expensive on a price/book basis at around 1.7 times compared to cyclical peaks north of 3.0 and there is gathering yield support in some markets too.”

“In dollar terms silver is broadly flat this year and gold up by some 10%, returns which pale next to those made by Bitcoin and it does look as if bulls of the precious metals are throwing in the towel, lured away by cryptocurrencies or the prospect of rising interest rates or both.

“Yet if inflation does begin to surprise on the upside gold and silver still have the potential to come back into favour, especially as sentiment seems so washed out.”

Five slopes of hope for investors to treat carefully in 2018

“Short-term momentum looks good, as President Trump works on his tax reforms, GDP growth exceeds 3% and headline indices notch a relentless series of all-time highs, but earnings growth was modest in 2017 and as a result US stocks now look expensive.

“The market-cap-to-GDP ratio is north of 130%, above the 2007 peak and very near the 1999 one, while a 31 times cyclically adjusted price earnings (CAPE) ratio has only been exceeded twice in history, in 1929 and 2000, and disaster followed on both occasions. Even if CAPE is a poor near-term timing tool it has been a good guide to returns on a ten-year view – and buying US stocks at current CAPE levels in the past has locked in negative returns on a ten-year time horizon.” 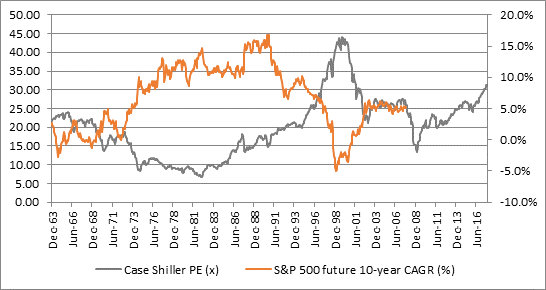 “It is dangerous to confuse “quality” – high margins, high returns on capital, strong cash flow and relatively predictable earnings – with “safety” because safety comes from paying low-to-fair valuations for securities, not high ones. Names like Reckitt Benckiser and Whitbread have underperformed badly in 2017, not because they did much wrong but because they did not exceed expectations and their stocks were already richly priced.

“There will almost certainly be a time to own such firms again but it might not be yet, especially as some big consumer staples names are looking to acquisitions to create growth. Pfizer’s plan to sell its consumer healthcare business could launch a bidding frenzy, with names including Reckitt, Nestlé and even GlaxoSmithKline rumoured to be interested. Investors in the “winner” in the bidding contest need to be careful they don’t end up owning a “loser” because it paid too much for the asset.”

“If you ignore the idiosyncrasies of global index compilation, then the world’s seven biggest-cap stocks are all technology names – Apple, Alphabet, Microsoft, Amazon, Facebook, Alibaba and Tencent. While valuations may not be as barmy as they were in 2000 they are still lofty and leave little room for disappointment – and it may not even take earnings disappointment for enthusiasm for these stocks to cool.

“There has been a clear rotation over the past month out of momentum and growth names into more value and cyclical plays, such as financials, to suggest equity investors think interest rates may surprise on the upside thanks to what is increasingly being seen as a synchronised global recovery.

“If growth does come through, then investors may be tempted to buy cyclicals (where valuations are lower) rather than tech or biotech (where multiples are way higher) not least as there is less need to pay a premium for tech-style growth if earnings are moving higher more widely across a range of industrial sectors.”

“Western central banks have publicly declared their intention to create a wealth effect through zero interest rates and Quantitative Easing (QE) by driving up the value of securities and assets. They have succeeded in one half (rising asset values) even if the trickle-down benefits seem less clear.

“The Fed is already increasing rates and has switched from Quantitative Easing (QE) to Quantitative Tightening (QT) by shrinking its balance sheet, the European Central Bank is slowly tapering its QE scheme and even the Bank of Japan (BoJ) is dropping hints it may be time to back away from its full-throttle stimulus programme. Any faster-than-expected removal of central bank liquidity could be a shock to a range of asset classes – stocks, bonds, cryptocurrencies, art, you name it – which have feasted off cheap money.”

“In a world where interest rates remain near zero in the West and are rising only slowly (if at all) many investors are still scrambling for yield and the danger of over-reaching for a yield that is seen as attractive remains.

“The premiums offered by investment-grade and sub-investment grade corporate bonds relative to government bonds are very thin by historic standards and leave little room for protection if inflation suddenly catches light and obliges central banks to move faster on rate hikes than they have been. In this scenario bond price falls would more than likely offset any yield benefits, so investors need to approach fixed income in particular selectively and with caution. The same can be said for equities where a number of high-profile dividend cuts in the UK (Pearson, Provident Financial, Carillion) or the fear of one (Centrica) crushed share prices and inflicted losses on shareholders in stocks which had looked to offer an attractive dividend yield.

“Income remains an important strategy but investors need to ensure they do not over-reach for yield and leave their capital exposed to undue risk.”