“The FTSE 100 is trading only marginally below its March all-time high of 7,430 and volatility is still very subdued,” comments Russ Mould, investment director at AJ Bell.
5 April 2017
Share:

“But it is exactly at such times, when making money looks easiest, that caution is warranted because this is when valuations are at their highest and therefore margins of safety in the event of a sudden shock at their lowest.

"One eye must be kept on sterling’s rally to around $1.25 as any sustained gains in the pound may provide the first challenge to the UK’s headline index.  In addition, it should be worth (re)visiting five tried-and-trusted indicators to see whether the UK stock market is primed to fizz higher still or in danger of going a little flat (or worse).

"We performed this analysis in August (when the FTSE 100 was at 6,866) and January (7,290) and concluded that no red lights were flashing. This time around the picture is less clear cut with three signals potentially showing amber, a state of affairs which may not be enough to call the top but one that suggests investors should not be getting carried away and perhaps checking their portfolios to see they are suitably balanced and capable of withstanding any future lumps and bumps.

"A 6.6% gain in the FTSE All-Share Transportation since its February low for the year sounds encouraging but the benchmark’s failure to make any progress since last summer is of greater concern – the index stands 1% below is August 2016 peak (although a 20% drop in its largest constituent, the dour Royal Mail, is not helping matters here).

"Even if it is possible to make allowances for the becalming influence of the UK’s postal service, it is harder to ignore the sudden halt in the Dow Jones Transportation index in the USA, which has rolled over. The Dow Transports has lost 5% since its peak on 1 March and is now barely higher than it was at the start of the year.

"Neither index is flashing red by any means, as both still trade close to all-time peaks, but their inability to provide leadership must be seen as an ‘amber’ signal.

UK and US transportation stocks have stopped rolling smoothly along 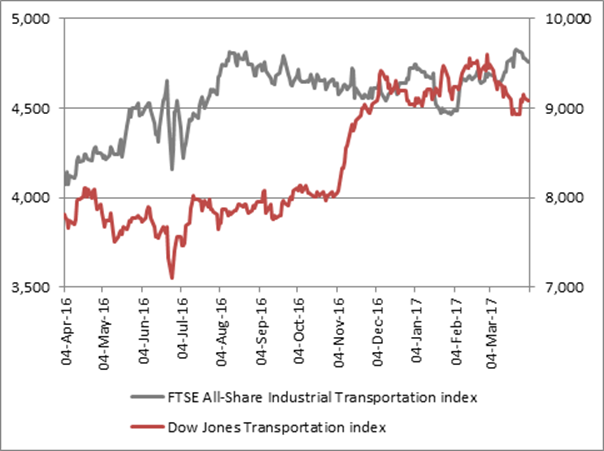 "The industrial metal is a great barometer for global economic health and a sustained increase in copper prices would help to reaffirm investors’ faith that the reflation trade which has dominated since the UK Brexit and US Presidential votes remains the right narrative to follow.

"However, copper has retreated by 6% from its February high to again raise a few question marks and perhaps suggest that its late autumn/winter strength was merely the result of industrial unrest in Chile rather than strong underlying demand.

"This is therefore a second ‘amber’ signal for markets. 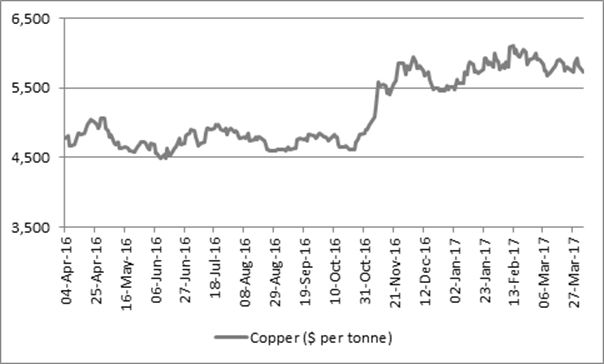 "Market minnows are an excellent indicator of risk appetite - they tend to outperform when investors are bullish and fall faster than the broader market when they are bearish.

"The good news is the UK’s FTSE Small Cap continues to make solid progress and bulls will be pleased to see the index ticking consistently higher.

"The less good news is a slight stumble in America’s Russell 2000. Its loss of momentum has coincided with the first doubts about the Trump reform programme (following the visa debacle and the failure to progress healthcare reform) and given its previous leadership role the Russell’s wobble must also be seen as an ‘amber’ signal. 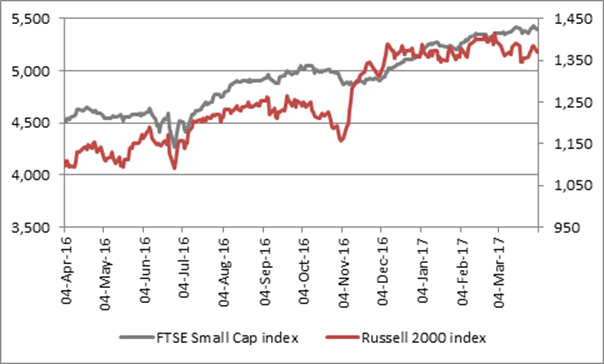 "Volatility can be the friend of the investor – it can provide chances to sell stock expensively or buy it cheaply – but history shows that stock indices progress best when they make serene progress and a series of modest gains and tend to fare less well when trading is choppy and there are big swings up and down.

"This year has so far been characterised by a period of remarkable calm.

"Further peaceful gains, in incremental steps, would further encourage this is a bull run and not some frenzied bubble that is primed to burst and as such this signal is still flashing ‘green’.

A period of market calm is looking like a good thing, at least for the moment: 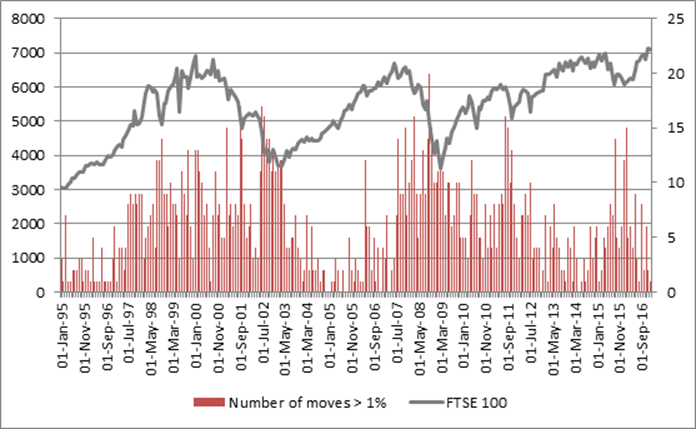 5.    Valuation – and especially the dividend yield.

"In the end, the valuation paid for an asset is the ultimate arbiter of the investment returns made on it. Valuation metrics using forecast earnings can be unreliable, as those forecasts are often wrong, so dividend yield can offer more comfort. Management teams are reluctant to cut the shareholder payouts as this tends to hit a share price hard and potentially their own wallets.

"That may be less than the 301 basis point premium on offer in late June last year after the EU referendum vote but the All-Share has only twice consistently offered a premium yield of 2% or more since 2008 - and on both occasions the stock market promptly made healthy gains.

"The danger here is that inflation expectations go higher and either drag bond yields with them, prompt a Bank of England interest rate increase, or both, potentially eroding the premium yield on offer from stocks. Equally, there is a risk dividends could be cut, especially as the FTSE 100’s dividend cover is thin by historic standards.

"The former looks to be the bigger risk at the moment, as only Pearson has warned of a dividend cut in 2017, but the yield premium looks like a ‘green’ light for stocks, even if the mood of the market is more about capital return than reliable income right now. 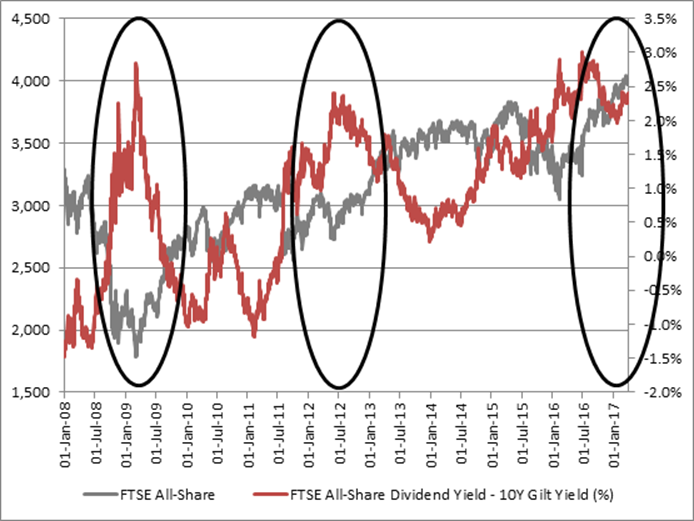 "In sum none of these five signals look to be flashing ‘red’, although the transportation stocks, Dr Copper and US small caps are showing ‘amber. ’ UK small caps, low market volatility and the equity yield premium over bonds could all be interpreted as potential green lights to fresh advances in the FTSE 100 in 2017.”