“William Hill himself used to take bets over the phone from the famously nocturnal racehorse owner Dorothy Paget after the races had been run, because he knew she was a wild gambler and had no chance of finding out which horses had already won, at a time when there were no licenced betting shops, let alone live radio or television broadcasts or mobile phones*. 888 will be hoping it is on to a similar sure-fire winner with its acquisition of the European assets of the betting empire built by Mr Hill,” says AJ Bell Investment Director Russ Mould.

“888 unsuccessfully tried to buy William Hill in 2016, as part of a complex three-way, £3 billion deal with Rank, when it nearly turned the tables on Hills, which had failed in a lunge for 888 the year before.

“888 will feel that patience has paid off, not least as the total bill this time is £2.2 billion. Moreover, the deal will hugely enhance 888’s size, share and competitive position, especially in the all-important online betting arena in regulated markets.

“In 2020, 888 recorded sales of $814 million and earnings before interest, taxes, depreciation and amortisation (EBITDA) of $156 million. Including William Hill International’s assets takes those historic figures to $2.5 billion and $464 million. 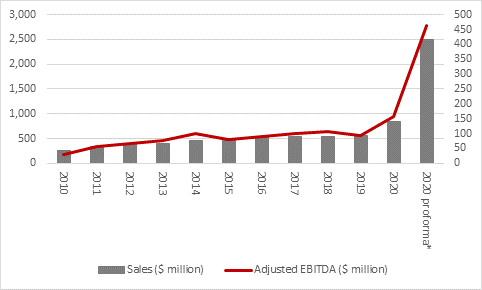 “On top of that, 888 expects to generate $100 million in cost benefits and will doubtless also be looking to drive revenues higher through cross-selling games and services to existing and new customers – 888’s business mix is more heavily slanted toward games and casinos, William Hill’s more toward betting on horse racing and sports.

“For all of the deal’s potential, 888’s shares appear unmoved, and questions still have to be answered.

“Some investors may be wondering whether 2020’s pandemic-and-lockdown online betting boom can be sustained, given the greater range of leisure and spending opportunities that are once more open to consumers. Tighter regulation also remains a potential concern, notably in the UK, where the Government continues to review the 2005 Gambling Act.

“Others may be inclined to question the £2.1 billion in debt financing which 888 is using to initially fund its purchase and others will be noting the proposed £500 million equity raising, pending shareholder approval, which is scheduled for early 2022. Perhaps they are waiting for the new shares to come, potentially at a discount, before deciding whether to get involved or not.

“In addition, 888 will inherit William Hill’s UK shop estate, which has some 1,400 licenced High Street premises. These sites do not appear to sit easily with 888’s online history or future plans, although Entain (or GVC as it was then) kept the shops when it acquired Ladbrokes-Coral back in 2018.

“What is certain is that the deal catapults 888 into the big leagues.

“In the 1970s and 1980s, the British betting scene was dominated by the so-called Big Four bookmakers: Ladbrokes, William Hill, Corals and Mecca. Not one of those names is now independent.

“Instead, the new leaders are Flutter Entertainment, Entain (owner of Ladbrokes-Coral), Bet365 and now 888 (owner William Hill, which merged with Mecca in the 1980s). Bet365 has no High Street presence at all and the other three are all here more because of their online prowess than their physical store estate. Moreover, all four have ambitions to further their global presence for good measure.”

2006
Betandwin changes its name to bwin

2015
Unibet (Kindred) buys Stan James’ online business
William Hill makes an unsuccessful bid for 888
888 makes an offer for bwin.party digital entertainment but is trumped by a bid from GVC

2021
Entain receives bid from MGM Resorts, which it rejects
Gamesys agrees in principle to acquisition by Bally Corporation