“One technical sign of a really healthy market is good breadth, with lots of the constituents taking an index higher, while it can be a cause for concern if a small group of heavyweight stocks or just one hot sector, is responsible for a benchmark’s gains,” says Russ Mould, AJ Bell Investment Director.
Russ Mould
4 January 2018
Share:

“Bulls of the FTSE 100 will therefore be a pleased to see that the late-December rally showed a fresh increase in the number of stocks trading above their 50 and 200-day moving averages:

“This issue of breadth will have a great say in how the FTSE 100 may perform in 2018 and beyond and investors need to keep their eyes on four significant groupings of stocks, as they dominate consensus forecasts for profit and dividend growth. They are (in alphabetical order):

“An aggregate of bottom-up analysts’ consensus forecasts shows that this quartet is expected by analysts to generate roughly two-thirds of the index’s total profits and dividend payments in 2018.

“Most of these four sectors can be seen in a reasonably positive light, with consumer discretionary and financials in particular showing good momentum, based on the number of stocks that are trading above their 200-day moving averages.

Number of stocks by sector above their 200-day moving average: 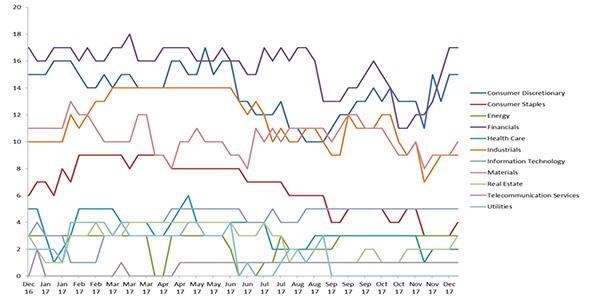 “The banks passed the Bank of England’s latest round of stress tests and profits could improve nicely if they can cut down on the fines and misconduct charges while any rise in bond yields should help the insurers. Meanwhile, rising crude prices are helping to reassure advisers, clients and fund managers that the dividends offered by the oil majors Shell and BP are relatively safe.

“Of greater concern is the contribution from consumer stocks. The forecast increase in earnings (and thus dividends) from the staples names rests heavily on British American Tobacco and Imperial Tobacco making the most of their recent acquisitions, as well as an improvement in the fortunes of the food retailers which is less certain, given the ongoing assault they face from the discounters.

“The anticipated increase in earnings from discretionary-spend-related stocks such as retailers, travel and leisure and media names is also open to debate, although any unexpected strength in the pound could help several stocks here, by dampening inflation, boosting consumers’ real spending power and making overseas holidays more affordable for good measure.

“Looked at it in these terms, the FTSE 100 may not be getting overheated after all, although a slide in oil prices, a weak pound and soggy bonds yields (in the event the Brexit talks or some other factor weighs on sentiment and the UK economy) could between them quickly unravel the promising picture.”

A moving average is an indicator used on share price charts that smoothes out near-term movements over a pre-set number of days, often 50 or 200.

It is calculated by working out the simple average of the share price (or stock index or commodity) over the chosen time period and shows a historic trend in a given security’s market worth.

Chart-followers, or technical analysts, like to see moving average charts that are trending higher as this suggests momentum in the security remains strong. Best of all, they like to see a so-called ‘golden cross’ formation, whereby the 50-day moving average moves up through the 200-day moving average. This is often taken to mean that the security has very strong near-term moment, or technical strength, to supplement the fundamental attractions it is presumably showing in terms of profits, cash flow and dividends.

By contrasts, chartists are less enthused when a security lags or breaks down below its moving averages as this can be indicative of a loss of price momentum and further weakness to come. Worst of all is the ‘death cross’ pattern when the 50-day moving average falls through the 200-day moving average, the direct opposite of the ‘golden cross’ formation.

For the record, the FTSE 100 itself briefly dipped below its 50 and 200-day moving averages on two occasions in 2017 although it subsequently rallied, to offer some grounds for optimism, from a technical perspective, for 2018. 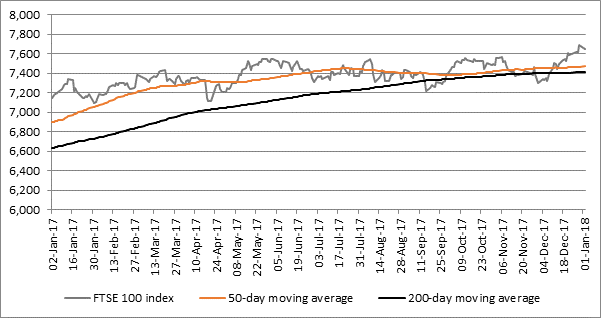