“Next may have disappointed a few optimistic analysts who had expected the retailer to declare a full-year dividend but in March the number of UK-listed firms that made or restored payments to investors once more comfortably exceeded those who cut them,” says Russ Mould, AJ Bell Investment Director.

“Payment declarations came to £7.2 billion, while a further £0.7 billion worth of dividends were restored, against just £0.3 billion of cuts. Royal Mail also flagged it would declare a one-off dividend of 10p a share, worth some £100 million, alongside its full-year results in May.

“The aggregate of dividends paid and restored now exceeds the value of those cut or cancelled since COVID-19 swept around the world by £14.7 billion, or nearly 30%, to suggest that companies really do feel the worst may be behind us, in terms of the pandemic and the economic downturn.

“Share buyback activity picked up, too, putting a little more cash in investors’ pockets. A dozen companies announced new buybacks schemes in March, with a value of £2.2 billion. That included four FTSE 100 firms – NatWest, Sage, Ferguson and CRH – and buybacks with a value of £3.6 billion have already been declared in 2021 overall.

“Uncertainty over new waves of the virus in Europe mean the scenario of a robust economic recovery is by no means certain to play out, while the base for comparison on a year-on-year basis is about to reach its softest point.

“Dividend cuts peaked last March as firms responded swiftly to the pandemic and the bulk of the damage, from the narrow perspective of investors, had been done by July.

“The comparisons will get tougher from there and investors will then be back to measuring not whether a firm has cut, kept or restored a payment but how distributions measure up to analysts’ forecasts – not that the absence of a dividend appears to be doing Next any harm today, in the wake of the retailer’s latest profit forecast upgrade, which will help to give some basis to analysts’ estimates for dividends in the year to January 2022. 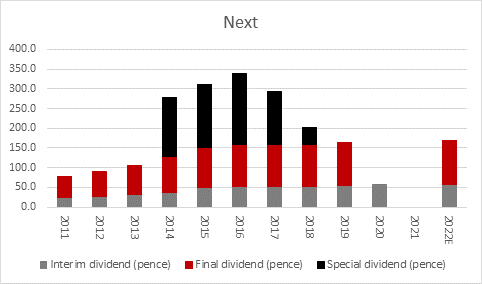 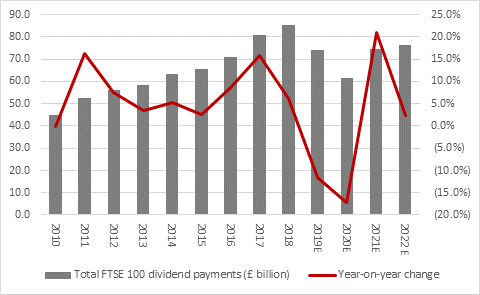 “Next is currently expected by analysts to be the sixtieth biggest payer in 2021. The top ten between them forecast to provide 49% of the total and the top 20 some 69%, so when it comes to measuring the overall yield of the FTSE 100, these are the names that must be watched most closely.

“Miners, banks and consumer staples dominate, although the oils still have a major role to play. Although Unilever, Reckitt Benckiser and Diageo should offer a welcome degree of predictability, the other three could all do with a strong economic recovery, if there are any stumbles along the way then perhaps those investors who are seeking income from UK equities will start to become more nervous again, even if the first three months of 2021 have offered them much encouragement, as well as welcome cash.”