For all of the noise generated by the FTSE 100’s record-breaking run that began 2017, the UK’s headline index is up by just 1.6% so far this year amid remarkably placid trading and while such a sleepy start to the year has many market-watchers on edge, history suggests it is normally a good rather than bad sign.
1 March 2017
Share:

“There is no guarantee that history will repeat itself but the figures could be seen as providing support for the old saying that ‘markets climb a wall of worry but slide down a slope of hope’.

“After all, markets have plenty of potentially tricky issues to ponder, including whether President Trump can deliver on his planned tax-cutting, infrastructure-spending and deregulating plan; Europe’s forthcoming elections and their implications for the euro; and the UK’s ongoing debate over Article 50 and what it will mean for our economy.

“The second half of that saying – which is much less well-known – does remind investors to guard against complacency. It is when expectations – and hopes – are at their highest that disappointment tends to follow and those setbacks initially lead to higher volatility and finally a broad market retreat.

“You then tend to see further gains although these are much more hard won as markets begin to take several steps back before they rise, as higher expectations (in the form of higher valuations) leave them prey to potential disappointment. The 1998-1999 period, along with 2007, were both instances when spikes in volatility acted as a warning that all was not necessarily well. 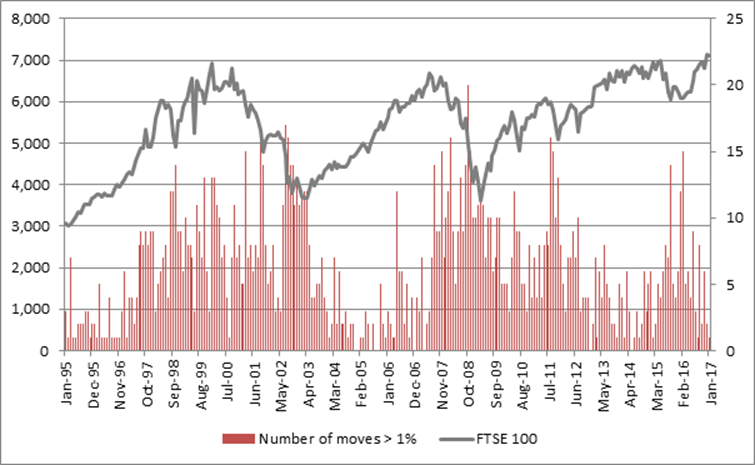 “Then comes panic as hopes for further earnings and dividend growth are conclusively dashed. Volatility rockets as bears maul bulls and markets plunge, as evidenced by the steep FTSE 100 falls of 2000 to 2003 and 2008 to 2009.

“Yet it is when volatility peaks and fear is at its height that investors should look to step in and take advantage of the panic selling. Psychologically this is so hard to do but as legendary investor Sir John Templeton remarked: ’Bull markets are born on pessimism, grow on scepticism, mature on optimism and die on euphoria.’

“That said, investors should not be complacent and should look to build a well-balanced, long-term portfolio which prepares them for, and protects their money from, a range of potential market and economic scenarios and not just the one they think will come to pass.”