“Gamesys has come a long way since its switch to the London Stock Exchange from Toronto in 2017 and the gaming services company may be about the enter the next stage of its development as part of American firm Bally. The racetrack and casino has launched an all-cash bid for Gamesys, although investors do have the option to take shares in Bally if they prefer,” says Russ Mould, AJ Bell Investment Director. “This is the latest swoop for a British gaming specialist by an American one, after Caesar’s successful lunge for William Hill and MGM Resorts’ unsuccessful one for Entain. It does make you wonder whether MGM Resorts will spin the wheel again, while shares in 888 are up in sympathy with those of Gamesys. 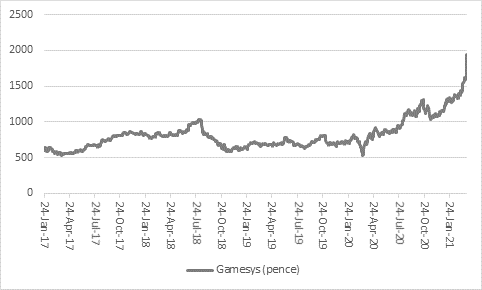 “FTSE 250 member Gamesys changed its name from Jackpotjoy to JPJ and then in 2019 it purchased the platform software provider that now gives the firm its name along the way.

“That deal has already begun to nicely pay its way, judging by the full-year results that Gamesys released earlier this month (9 March). On an underlying basis, sales rose 29%, underlying net income rose 86% and free cash flow was excellent – so good, in fact, the Gamesys paid maiden dividends for fiscal 2020 and raised of prospect of higher shareholder distributions and even share buybacks in 2021.

“The company’s strong free cash flow, relatively lowly valuation and platform technology expertise will have all caught the eye of Bally, which will be looking to make the most of the deregulation of betting in America.

“In 2018, the US repealed 1992’s Professional and Amateur Sports Protection Act to effectively legalise betting on sports beyond the borders of Nevada by giving individual states the ability to tax and regulate this activity themselves.

“Following the November 2020 Presidential election in the USA, when some states also held ballots on the legalisation of gambling at the same time, 29 states have legalised or introduction legislation to legalise sports betting and only three – Idaho, Wisconsin and Utah – have done nothing at all on the topic.

“The rise of sports betting, online or otherwise, in the USA could be a boon for cash-strapped states who are struggling to cope with the economic shock inflicted upon them by the pandemic. Some states charge hefty initial licensing fees and all will look to pocket taxes as a percentage of gross gaming revenue for good measure, meaning that states, companies and investors alike could all potentially benefit.

“Bally will be looking to use Gamesys’ technology to leverage its existing footprint, which extends to casinos in seven states and Arapahoe Park racecourse in Colorado.

“Gamesys may be best known in the UK for its Vera and John online bingo games, as well as Intercasino and Rainbow Riches.

“If the deal closes – and Gamesys’ shares have surged to a premium relative to the offer price – then this would be latest action in a market that has been in a frenzy since the American regulatory changes, as leading players have jostled for position in what could be a betting boom Stateside, just as other markets, including the UK, Sweden, Germany, the Netherlands and Australia, all tighten their rules.”

2006
Betandwin changes its name to bwin

2021
Entain received bid from MGM Resorts, which it rejects
Gamesys agrees in principle to acquisition by Bally Corporation