“Global share prices may be rallying but gold is holding on to the gains it made in the second half of last year as confidence wobbled,” says Russ Mould. “Markets – alongside President Trump – are now pressuring the Federal Reserve to soften, if not change, its policy. If chair Jay Powell does decide to pause with further interest rate increases, or even go the whole hog and cut them, then gold could be a possible beneficiary.

“After all, such a major policy reversal would probably be the result of economic weakness and not just stock market stumbles and gold has tended to do well during downturns or recessions.

It soared from $672 to $1,096, for example, during 2007-09 when the American and global economies fell off a cliff and the US Federal Reserve responded with interest rate cuts and Quantitative Easing (and then kept going higher). The precious metal also thrived during the recessions (and stock market downturns) of the early 1970s and early 2000s. 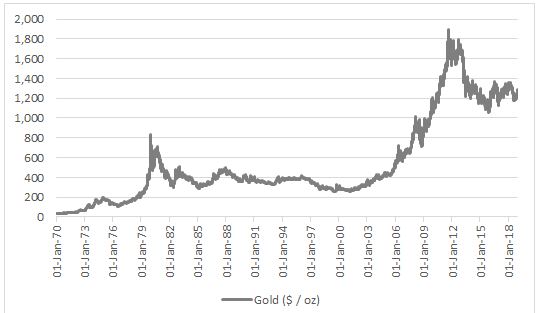 “The precious metal performed stoutly during December’s stock debacle and if central banks, President Trump and corporate earnings fail to lift confidence in stocks then it could continue to do well. Since the FTSE All World index peaked in September, that stock index has lost 10% while gold has risen by nearly $80 an ounce, or 7%. 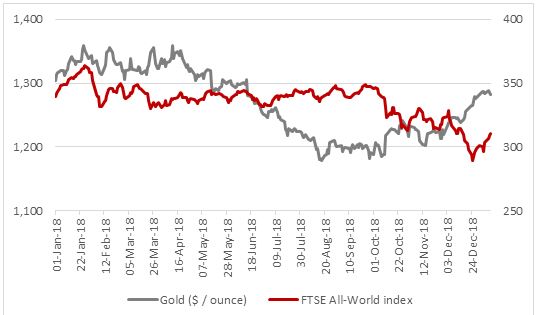 “Nor is a policy reversal from the Fed entirely impossible, even if it seems that Mr Powell is made of strong stuff and reluctant to bend to external influence, given his public comments that it is not the central bank’s job to stop people from losing money on the markets.

“A really steep drop could give him pause for thought but it would have to be much more than the 10%-plus retreat in the S&P 500 seen so far and be accompanied by a marked softening in the economic data.

“Car sales, housing volumes and economic sentiment indicators such as the purchasing managers’ indices are already weakening so this is not an outlandish scenario, especially as the growth in America’s debt burden at the government, corporate and consumer level means the US economy is likely to be more sensitive to even minor increases in interest rates.

“Investors will also remember how the central banks who were quickest to raise headline borrowing costs in the wake of the financial crisis all changed tack pretty quickly. Australia Sweden, Israel, the EU and New Zealand all tried to raise rates but had to row back (the Reserve Bank of New Zealand on two occasions) and have kept rates at or near record-lows ever since. 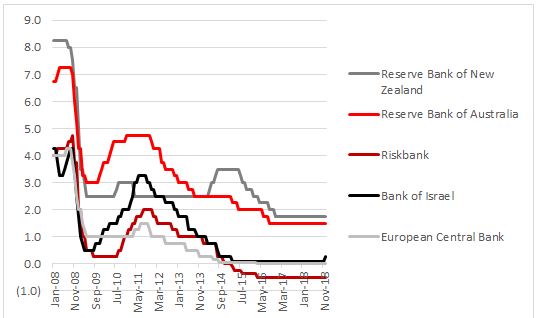 “There is no indication at all, as yet, that the Fed is even considering a cut to interest rates or a return to Quantitative Easing (QE) and if prevailing fears over economic weakness or policy becoming too tight then gold will doubtless be cast aside as a ‘barbarous relic’ once more.

“But if the Fed does turn tail, cut rates or even sanction a return to QE then the precedent of 2009-2012, after the launches of the first two rounds of QE, would suggest that investors could look to gold as a haven and store of value in the face of yet another round of ultra-loose, unorthodox monetary policy.