•    The difference in life expectancy at birth between the least and most deprived areas of England is 9.4 years for men and 7.6 years for women, official data reveals (https://www.ons.gov.uk/peoplepopulationandcommunity/healthandsocialcare/healthinequalities/bulletins/healthstatelifeexpectanciesbyindexofmultipledeprivationimd/2017to2019#slope-index-of-inequality-in-health-state-life-expectancy)
•    People living in the least deprived areas of the country have seen a “significant increase” in life expectancy since 2014, while in the most deprived areas “no significant changes were observed”
•    Data points to a widening life expectancy gap between rich and poor
•    Previous analysis has shown a North-South divide, with average male life expectancy in Westminster is 83.9 years – compared to just 74.5 years in Blackpool (https://www.ons.gov.uk/peoplepopulationandcommunity/healthandsocialcare/healthandlifeexpectancies/bulletins/healthstatelifeexpectanciesuk/2016to2018)

Tom Selby, senior analyst at AJ Bell, comments: “As a nation we have become increasingly divided, first in relation to Brexit and then over lockdown measures. However, on the greatest division of all – how long we can expect to live – politicians are comparatively silent.

“It is shocking that there is a gap in average life expectancy of almost a decade based purely on where someone is born. It is also deeply worrying that this gap appears to have been widening over the last five years.

“Perhaps the most striking example of this inequality can be found on the steps of Parliament. There is a near 10-year chasm between the average life expectancy of a male born in Westminster, one of the wealthiest parts of the country, and Blackpool, one of the most deprived regions in the North West of England.”

“These vast differences in life expectancy present significant challenges across a wide range of social policy areas, not least retirement income provision and the state pension. As such, they should be front-and-centre of the political debate.

“The current flat-rate state pension system and universal retirement age has the benefit of simplicity, but it also means those with the lowest life expectancies – who tend to live in the poorest areas – will, on average, receive the least.

“Some will argue this is fair given higher earners will, on average, pay more in National Insurance contributions over their lifetimes.

“However, there is a debate to be had about the future balance between simplicity and fairness in the system given the huge inequalities we can see across the country.” 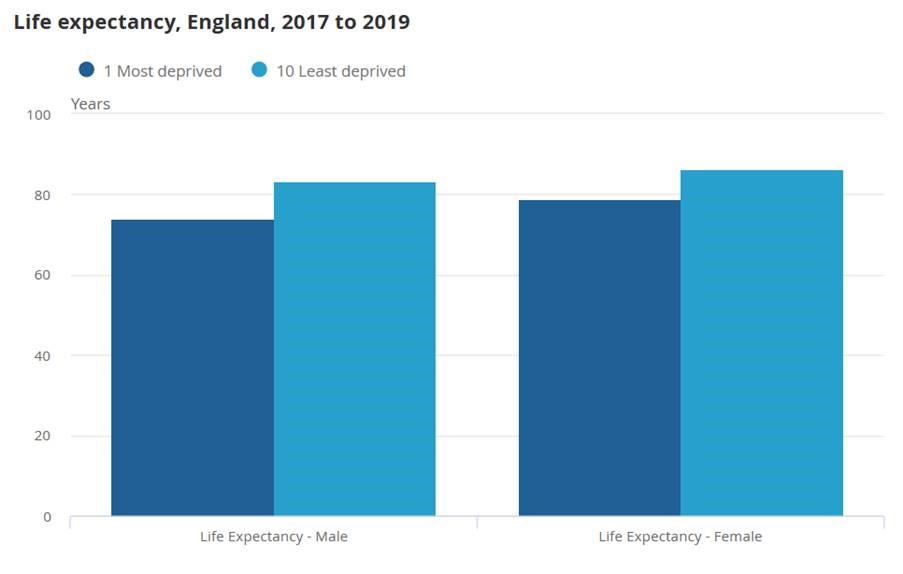