“The drop in Hammerson’s share price suggests that investors are ignoring the good news of an increased dividend and a small reduction in debt and focusing on the bad, namely the first drop in net asset value per share and the highest vacancy rate since 2008 and the first year-on-year drop in rental income in six years,” says Russ Mould, AJ Bell Investment Director.

“Investors have also clearly yet to warm to the strategic response to these trends outlined by the board and chief executive David Atkins, who are planning asset disposals worth at least £500 million and a shift in emphasis, beyond pure retail toward City Quarter developments that include residential properties.

“This gives a nod to the calls for change from America’s activist investor Elliott but also takes its lead from the US-quoted Simon Property Group. The world’s largest Real Estate Investment Trust by market cap, Simon is working to develop 19 of its 234 sites for alternative, non-retail uses and Hammerson today outlines 10 projects where residential building has a role in major developments, ranging from Dublin to Leeds, Birmingham to Brent Cross and Bristol to Bishopsgate, London. Leisure facilities and hotels also have prominent roles to play across 14 new developments and up to 6,600 residences and 1,200 hotel rooms are in various stages of planning and work.

“The drop in net asset value per share and increase in vacancy rates is clearly focusing the minds of Hammerson’s management team, as it retreats from last year’s plan to double-down on retail through the acquisition of Trafford Centre-owner INTU. 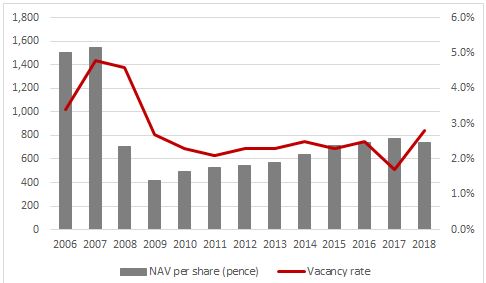 “Pressure on rental income may also be persuading management to reassess, especially as it this revenue which helps Hammerson to pay the interest on its £3.4 billion debt burden. Interest cover is still healthy but the company’s debt burden is higher now than it was in 2008, at the peak of the Great Financial Crisis. Rising property values mean that the loan-to-value ratio has stayed low but as they start to sink then this measure of how much debt there is in the business could start to look less robust – and this may explain why Hammerson is stepping up its disposal programme. 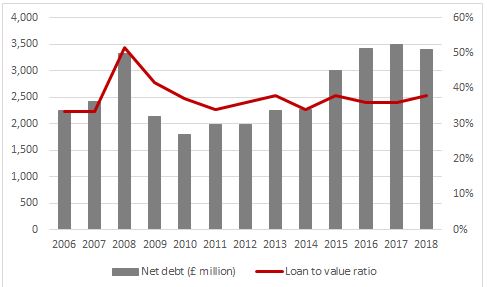 “The company is looking to sell at least £500 million in assets this year, to take debt below £3 billion, but there is no cap on the disposal plan and Mr Atkins notes that deals with a potential value of more than £900 million are under discussion.

“Spending on the purchase of new properties dropped to just £12 million in 2018, below even 2008’s nadir, and development and refurbishment spend fell to £89 million, the second-lowest figure in a decade. Meanwhile, disposals topped £550 million with more to come, so Hammerson does seem to be battening down the hatches as it prepares to meet the retail industry storm head on and seeks to prove that its portfolio is undervalued by investors. 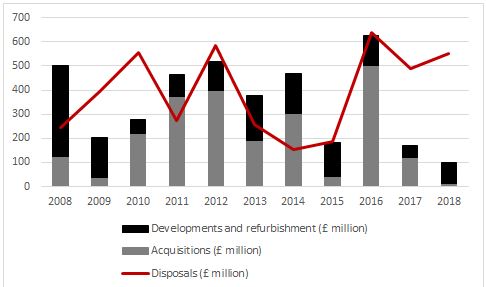 “A share price of 361p compares to the year-end net asset value per share figure of 738p – so the shares trade at a 50% discount. Reducing debt (and thus risk) and selling assets at good prices could be two ways of persuading investors to reassess their current downbeat view of the company’s prospects, as even a prospective dividend yield of some 7% for 2019 does not seem to be attracting many buyers to the stock.”