Hays rounds out a hard quarter for the UK jobs market

“After trading statements from Robert Walters and Page Group, Hays is rounding out the updates for the July-September period in the same manner as its peers,” says Russ Mould, AJ Bell Investment Director. “Hays’ update for the first quarter of its new financial year shows a lower rate of decline in fee income and some signs of welcome stability, features an understandably measured outlook statement and reveals how the UK’s performance continues to lag that of its international businesses.”

“Given the uncertain outlook – further clouded by the possibility of further lockdowns across a range of countries – share prices of Page, Robert Walters and Hays are all struggling to make progress. After an initial recovery from spring’s panic and market sell-off, all three stocks have largely flat-lined since early summer (rather like the wider UK stock market), as investors have pondered how the seemingly immovable object of the pandemic and its effects can be countered by the irresistible force of Government and central bank support and stimulus for the economy: 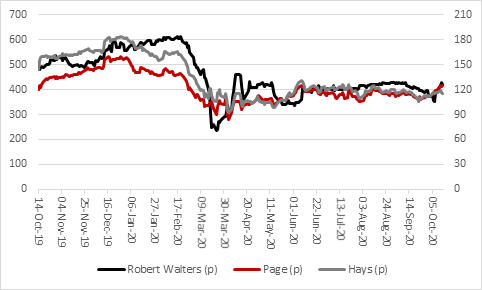 “The good news is that fee income fell by ‘only’ 30% year-on-year in the July-September quarter, an improvement on the 34% decline seen between April and June. That compares to drops of 34% and 31% at Page and Robert Walters respectively, both of whom also showed some improvement in the rate of decline. Encouragingly, Hays also talks of exiting the quarter with a run-rate decline of 26% year-on-year, to hint at further modest improvement in trading. 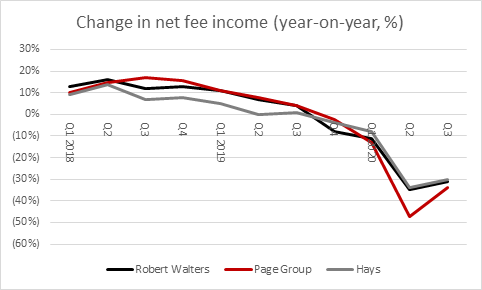 Source: Company accounts, based on calendar year. Robert Walters and Page have a December year-end, Hays a September year-end.

“Less easy on the eye is the manner in which the UK jobs and recruitment market continues to do worse than all of the other geographic regions addressed by the FTSE 250 trio.

“At Hays, UK fee income fell by 34% against a group-wide fall of 30% while at Robert Walters UK fees fell 35% against 31% in total and the performance gap was widest of all at Page, where the UK plunged 48% against a 34% overall slide.

“If you are looking for some crumbs of comfort, at least the sequential improvement in the UK was faster than the group average at Hays and Page, but the UK’s underperformance of the group-wide growth rates dates back to Q3 2015 at Robert Walters and Page and Q3 of calendar 2019 at Hays, which really doesn’t say much for how the UK economy was doing even before the pandemic hit home. 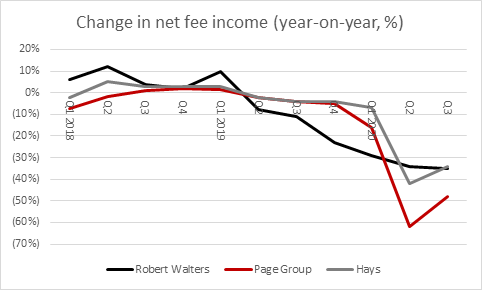 Source: Company accounts, based on calendar year. Robert Walters and Page have a December year-end, Hays a September year-end.

“One final sign of how fragile the jobs market it, not just in the UK but worldwide, is the mix in hires between temporary and permanent positions. When firms are trading strongly and confident, they will naturally lean more toward permanent hires whereas the opposite will apply during less certain times. Both Page and Hays showed a lower rate of fee income decline for temporary jobs than permanent in the July-to-September quarter.

“One positive sign going forward therefore would be a change in the relative momentum between temporary and permanent mandates, as well as a further improvement in the overall rate of decline in group-wide net fee income at all three recruiters, although the share prices suggest such a gear change is not immediately likely.