Encouraging trading updates from nationwide house builder Persimmon and Northern-focused builder and urban regeneration expert MJ Gleeson both offer further evidence that the UK residential property market is holding up well, just over a year after Brexit and in the midst of ongoing political uncertainty.
5 July 2017
Share:

“Shares in both Persimmon and MJ Gleeson advanced smartly and have now more than recovered the ground lost in the wake of the June 2016 EU referendum – both stand just short of all-time highs reached in April and May: 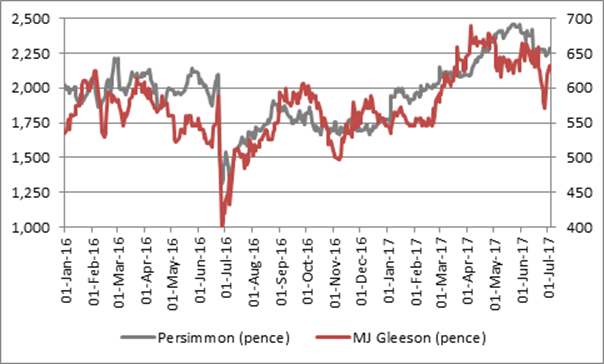 “A 3% gain in Persimmon suggests investors are particularly pleased with comments from chief executive Jeff Fairburn that the weekly private sales rate increased year-on-year in May and June, to cast aside worries over any effect the general election may have had on demand, as well as an 8% increase in completions and a 3.5% advance in average selling price to £213,000.

“Gleeson operates only in the North and its focus is purely on affordable housing, as shown by its first-half average selling price of £121,400.

“Its full-year volumes of 1,013 compare to Persimmon’s interim completions figure of 7,794 but demand is no less robust, rising 12%, while reservations rose 45% in the year to June.

“Both companies continue to open new sites and develop their land bank, with Gleeson unveiling a new target to double building volumes to 2,000 a year by 2022 now it has reached its longstanding goal of 1,000 homes a year. 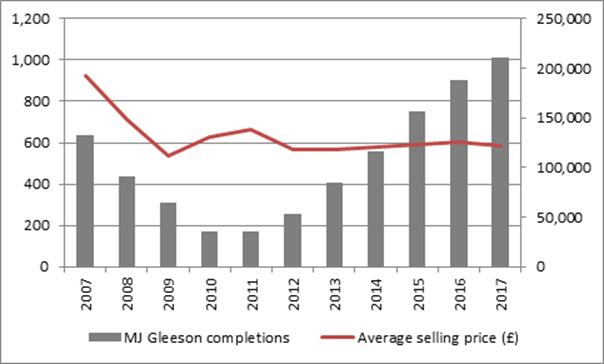 Source: Company accounts for financial year to June. 2017 data based on full-year update with interim ASP

“If Persimmon achieves an 8% growth rate in completions for the full year then its volumes will finally exceed the cyclical peak seen back in 2007, just before the financial crisis. 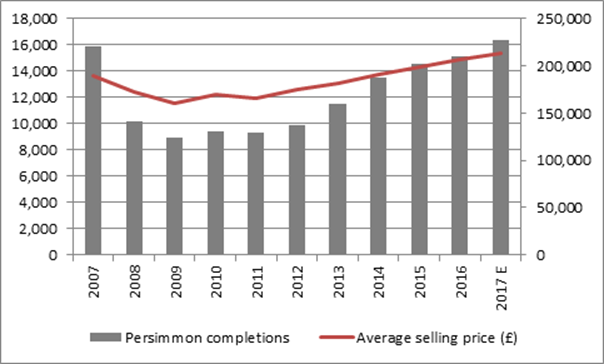 Source: Company accounts. 2017 numbers assume 8% volume growth for year and ASP is based on first-half update. Year to December.

“But investors still have to decide whether the shares represent good value or not, even allowing for the strong near-term new flow and potential for earnings forecast upgrades.

“Persimmon offers a big yield, owing to its capital return programme, but looks expensive on historic price-to-book-value ratios, while Gleeson’s unusual mix – it also prepares and sells land in addition to building houses – means it does not look unduly cheap on earnings, yield or book value, relative to its pure play peers. However, both look to offer strong earnings momentum and this may be enough to keep investors interested for the moment as demand for houses continues to outstrip supply.”