Tom Selby, head of retirement policy at AJ Bell, comments: “Since its introduction in 2011/12 the state pension triple-lock has dramatically boosted retirement incomes for millions of people.

“However, in 2022/23 the state pension will rise in line with the highest of inflation or 2.5% only, with CPI for September historically the figure used. This will therefore confirm just how much the Government’s decision to axe the earnings element of the policy will cost retirees.

“Average earnings for the three months to July 2021 – the figure historically used for the triple-lock – rose by a staggering 8.3%.

“This jump can primarily be explained by labour market distortions caused by the pandemic, with average earnings plummeting in 2020 as society locked down and then rebounding in 2021 as restrictions have eased.

“This would have been a boon to retirees but at a significant cost to the Exchequer in a year when lots of people faced huge uncertainty over their pay and employment.

“According to the Office for Budget Responsibility, every 1 percentage point rise in the state pension costs the Treasury around £900 million. This implies an 8.3% increase would have cost over £7 billion compared to freezing the state pension and over £5 billion versus a 2.5% rise.

“Despite being a central part of the Conservative Party manifesto, the triple-lock was viewed as too expensive a pledge to maintain – although it is due to be reinstated after next year.” 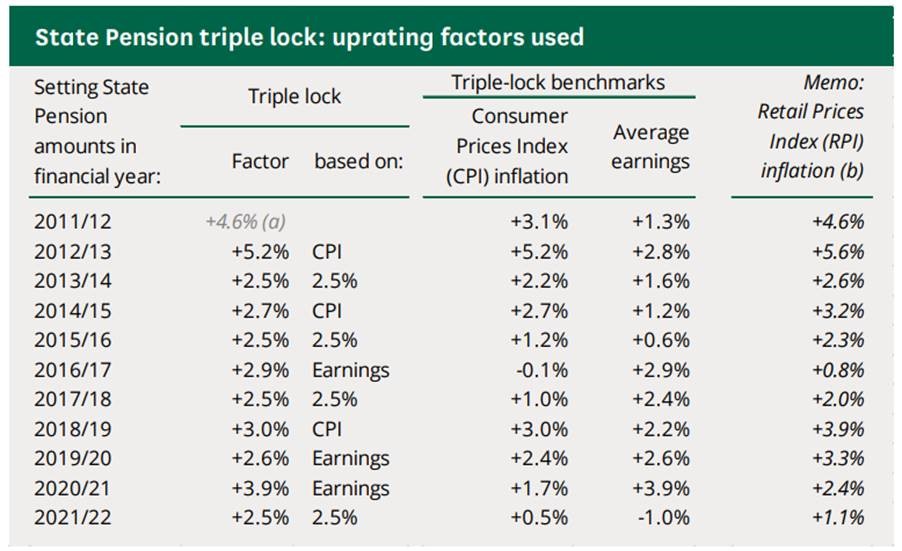