How high can commodity prices go?

“Governments effectively choosing to subsidise the use hydrocarbons via cuts in fuel duty, Egypt calling in the IMF to help it handle surging wheat and oil prices and chaos in the nickel market will all have investors wondering just how high commodity prices can go,” says AJ Bell Investment Director Russ Mould. “Ongoing concerns over the effect of sanctions upon Russian supply cloud the short-term outlook and galloping inflation could make a strong case for the inclusion of commodities in a balanced portfolio should it prove persistent.

“The nickel price is coming back to earth after its extraordinary intra-day spike to something close to $100,000 a tonne but the effects of that panic could be felt for some time. 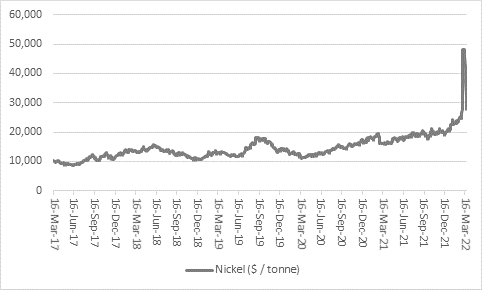 “Xiang Guangda, founder of Chinese nickel firm Tsingshan, has joined an infamous list of firms and traders who have had their trousers pulled right down when trading commodities. But neither the humbling experience nor its scale – a reported $8 billion paper loss – are as rare as investors might think.

“The main lesson to draw from this when it comes to trading commodities may well be ‘don’t try this at home,’ especially when using leverage (or trading margin using borrowed money) to do it. Going all-in on one commodity is simply too risky.

“By contrast, a considered long-term view on commodities overall may be a valuable source of upside, as well as downside protection, providing raw materials fit with the investor’s overall strategy, time horizon, target returns and appetite.

“The absence of yield makes valuing commodities difficult and ultimately the downside can only be quantified by assessing the marginal cost of production – anything between $1,200 and $1,400 an ounce for gold right now, for example, judging by the latest updates on their All-In Sustaining Costs (AISC) from the major precious metal miners.

“Once the downside risk is assessed, investors can assess what could provide upside. In truth, the sort of chaos witnessed in the nickel market is not the sort of action that typically occurs when sentiment is washed out and prices are near a bottom, so investors may wish to tread carefully. Equally, central banks cannot print gold or oil or wheat or copper, and with demand seemingly outstripping supply in the case of many raw materials investors can be forgiven for taking a second look and doing some detailed research.

“And once they have assessed the raw materials themselves, investors may then look at commodity-related stocks? They represent almost a fifth of the market capitalisation of the FTSE 100 and are expected to generate around a third of its total profits and dividends in 2022, so further gains or losses could have an impact on the headline index, something which investors who own tracker of exchange-traded funds (ETFs) should consider, even if they have no interest in researching or buying individual stocks themselves.

“No-one can blame investors from shying away from commodities after the shenanigans in nickel, where Xiang Guangda’s troubles stem from a short position.

“This was based on the premise the metal would fall in value. Instead, it rose sharply as traders and industrial buyers fretted about the potential loss of Russian supply and the trader then had to close out his position, buying more metal and creating a self-fulfilling (and in Xiang’s case self-defeating) upward price spiral. The net result was an $8 billion loss, on paper anyway, and entry into a far-from exclusive club of big commodity price losers which includes:

•    The Bunker Hunt brothers’ $1.7 billion loss when they tried to corner the silver market in 1979
•    The German conglomerate Metallgesellschaft lost $1.3 billion on oil futures in 1993
•    Sumitomo’s Yasuo Hamanaka, who lost $2.6 billion in copper in 1996
•    Liu Qibing racked up losses thought (but never confirmed) to be more than $1 billion when trading copper for China’s State Reserve Bureau in 2006
•    The hedge fund Amaranth blew itself up with a $6 billion loss as natural gas price fell, instead of rising as expected, in 2006

“The Tsingshan losses are the first major accident in the commodities market for a while (and in inflation-adjusted terms the Bunker Hunts came a far bigger cropper) but they do beg the question of whether they are sounding a bell for a market top in the price of not just nickel but raw materials across the board after their recent surge.

“The best cure for high prices is high prices as they prompt a search for other options or force users to consume less. Unlikely as it may seem right now, any sort of ceasefire or peace deal in Ukraine could also ease a lot of fears over supply from Russia, which is a top-five global provider of palladium, diamond, gas, oil, platinum, aluminium, potash, nickel, titanium and steel.

“However, the conflict is not the only story when it comes to commodities (and nor are commodities the only story when it comes to the conflict, given the human suffering involved). Neither miners nor oil explorers have invested heavily for some time in new capacity, owing to the combination of weak commodity prices in the middle of the last decade, the need to pay down debt after an acquisition spree, calls for higher cash returns from investors or pressure from environmental campaigners (and the wider public).

“If demand remains strong, either from industrial buyers as the global ticks along, or financial ones if they feel the need to seek a haven from inflation, then raw material prices could yet move higher over time.

“Some of the potential upside does look priced in, since the Bloomberg Commodity index is once more handily outperforming the FTSE All-World equity index, just as it did during 2000-2010 period when central banks had to slash interest rates in two cycles in the face of two economic and stock market busts – maybe the policy response to the pandemic will produce another upswing. 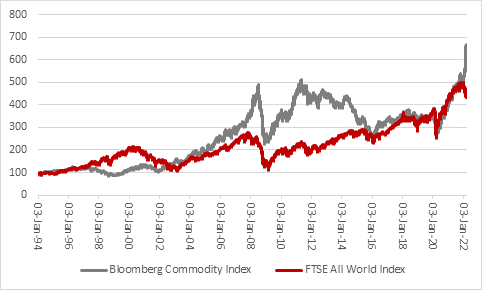 “But analysis of the Bloomberg benchmark against the FTSE All World on a relative basis shows a slightly different picture.

“If commodity prices really go into orbit, then this suggests ‘real stuff’ could outperform ‘paper assets’ for a good while and by a good degree yet, especially if inflation or stagflation are the ultimate economic outcome. Commodities’ outperformed much more strongly and for much longer in the 2000s than they have thus far this time around. 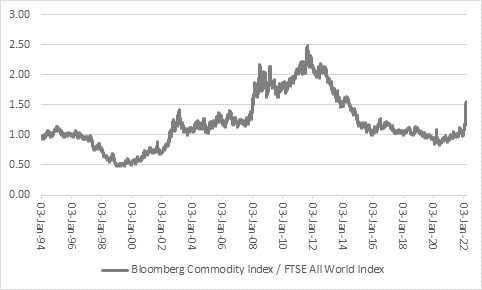 “Equally a recession would in all likelihood be bad news for many commodities, especially industrial metals, although precious metals could yet shine under those circumstances, depending upon the policy response from governments and central banks.”