If you want to know why the Federal Reserve is pausing on interest rates, this may be the answer

“In the wake of this month’s meeting of the US Federal Reserve, markets continue to believe that the central bank will be less aggressive with monetary policy this year, even though this seems at odds with much of the economic data, let alone President Trump’s proclamation of an ‘economic miracle’ in his State of the Union speech,” says Russ Mould, AJ Bell Investment Director. “There remains the depressing possibility that US policy makers are backing off in the face of late 2018’s stock market volatility but there could be another explanation, which is that the foundations of America’s economic growth may not be as robust as they seem.

“This looks like a strange thing to say when the 4% unemployment rate is as low as it was during the boom 2000, wage growth is running near nine-year highs, the last published GDP growth figure was 3.4% and corporate profits stand at record highs.

“Unless chair Jay Powell is as fixated with the level of the Dow Jones Industrials as President Trump (which should not be the case, given his prior comments on the relationship between the central bank and markets), the Fed is presumably looking at something else.

“The data show that the only way may be up when it comes to unemployment rates, given the current level is only a fraction above 50-year lows. And if that is the case, many Americans may be poorly prepared for any ill-wind that does blow, judging by the latest US household debt data from the New York Federal Reserve. 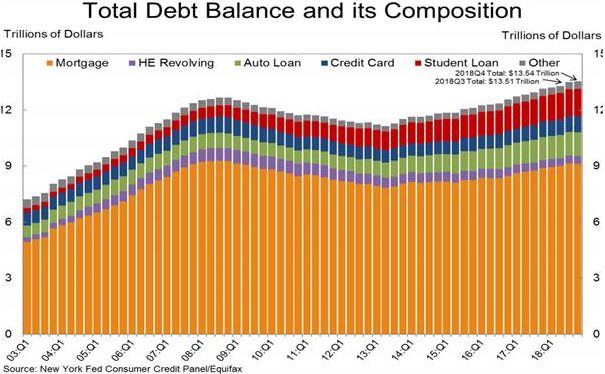 “That means total borrowing once more exceeds the pre-crisis peak of 2008 and is up by a fifth from its post-crisis lows in early 2013.

“And even though the US economy is on the face of it humming along, delinquencies, whereby a borrower is 90 days or more behind on their interest payments, are rising. In Q4 2018, credit card and auto loan delinquencies increased.

“Even the numbers of student loans that were in arrears fell and mortgage delinquencies remained very subdued at 1.1% this is a worry, especially with regard to cars, where the 4.5% arrears rate is the high since 2012. 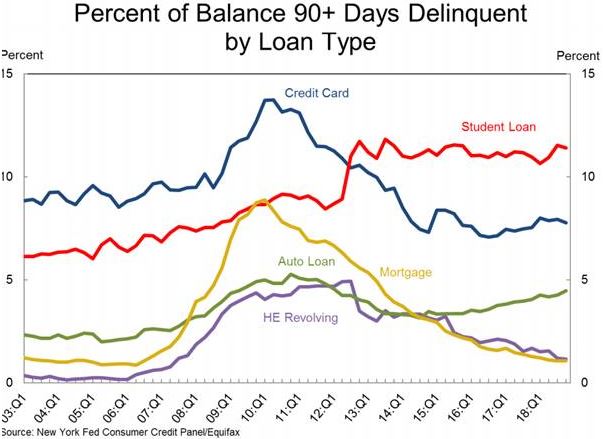 “This has possible implications for auto demand in the USA, which has already flattened out, and leaves American consumers exposed to any unexpected loss of their job or increase in interest rates and thus borrowing costs.

“Add in ballooning US Government debts, at both the federal and state level, and America has never been more indebted. It may not be a coincidence that as US debt has increased, the peaks and troughs in headline US borrowing costs have become successively lower. 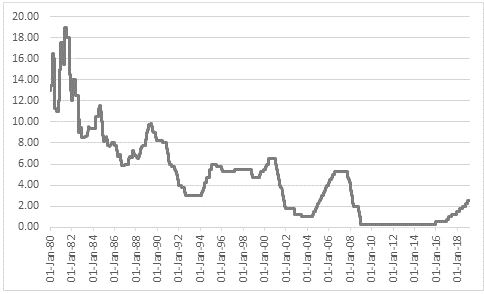 “This leaves the Fed with every reason to tread carefully when it comes to increasing headline interest rates, since the higher debt pile leaves the US much more sensitive to even minor changes in borrowing costs.

“Financial markets still seem to be basking in the benefits of both cheap money and the sugar rush provided by President Trump’s tax cuts, which many likened to Reaganomics under another Republican President in the early 1980s. Yet Ronald Reagan inherited a much healthier financial position, which gave him leeway to cut taxes, while Fed chair Paul Volcker was about to squeeze inflation lower and start slashing interest rates from a peak of 19%.

“You can argue that the Fed has managed to keep the plates spinning since 2009, with record-low interest rates and some $3.5 trillion in Quantitative Easing.

“But you can also argue that encouraging companies and consumers to borrow – and by enabling Government to do so – the Fed could yet find itself in a Japanese-style debt trap, from which it could yet find it difficult to escape.

“Mr Powell’s interest rate pause could be an early symptom of this dilemma, one which has already become evident over the past three decades in Japan and more recently in nations which tried to raise interest rates but quickly backtracked, as economic growth began to slow, weighed down by an unwelcome appreciation in the local currency, higher interest payments or both.

“None of these concerns may stop financial markets rising. The last ten years show that asset prices feast of cheap money and plentiful liquidity. But stock and bond and commodity prices proved equally sensitive in late 2018 to even minor rate rises and modest withdrawal of the QE stimulus by the US Federal Reserve, as well as a pause in QE by the European Central Bank and an undershooting of its bond-buying targets on behalf of the Bank of Japan.

“As a result, investors will continue to watch central bank policy closely and there has to be a chance that growth becomes more stop-start and financial markets more volatile as the monetary authorities try to find the right policy balance for both their respective economies and asset prices.