“Central bankers seem content to let inflation run hot and accept a period where increases in the cost of living run above their 2% target, not least as it helps to flatter nominal GDP numbers and thus debt-to-GDP ratios, but companies are already feeling the pressure that can build if inflation runs fast and loose for long, as McBride’s monster profit warning makes clear” says AJ Bell Investment Director Russ Mould. “The manufacturer of cleaning liquids, powders and aerosols has flagged that full-year profits will now come in at less than half the level expected by analysts, higher raw material and distribution costs, as well as problems sourcing sufficient supply of both materials and truck drivers. 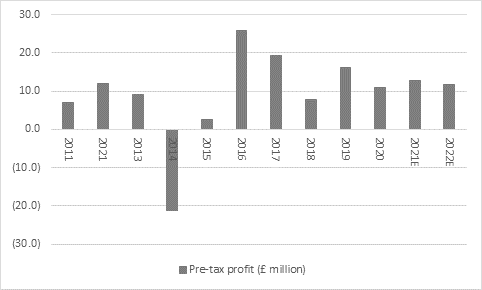 “McBride is putting up prices, but these will take effect later than hoped, at least from the company’s point of view. Consumers – and central bankers – will take note, as that means price increases further down the line for them to meet or at least mull over.

“McBride’s difficulty in putting up prices quickly enough to compensate for higher input costs are a reminder to investors that pricing power is a key attribute for any firm to have, even if markets are currently being remarkably tolerant of, and generous to, companies which do not make profits and almost seem to lose more money they more customers they grab.

“If inflation does take hold, promises of future profits after the current dash for market share and critical mass may well look less attractive. Investors may shy away from such profitless prosperity and instead focus on companies which can demonstrate their ability to protect margins and still generate profits and cash flow.

“McBride’s role as a contract manufacturer, or at least a maker of own-label cleaning agents for retailers, means it does not have any pricing power from brands, as it has no brands of its own. Many of its customers are larger and have more muscle when it comes to pricing discussions. And there are other suppliers who can be used as a bargaining chip by customers for good measure.

“McBride therefore looks like a classic study for Porter’s Five Forces, a framework that investors could do well to bear in mind if inflation really does take hold. The analysis, first outlined by Michael Porter in the Harvard Business Review in the 1970s, outlines the five threats to any company’s competitive position and thus its ability to charge the prices it wants, and not just the prices customers are prepared to pay.

“For the moment, it looks like McBride is the meat in the sandwich between suppliers and buyers and its profits – and share price – are being squeezed accordingly. The company is therefore warning for the year to June 2022 even before it has published its results for the year to June 2021 – they are due in September. A further sign of how tough times have become is the Board was still confident enough to be sanctioning share buybacks in May – a programme which looks to have done little for the share price after today’s slump, like so many other buybacks schemes.