“Inflation has risen again, with those expectations of it hitting double digits before the year is out looking like a closer and closer prospect. Inflation of 9% is a mighty blow to savers with money sitting in cash, who had been waiting for higher interest rates only to now find them wiped out by rampant inflation.

“While the Bank of England has sluggishly started to raise interest rates, savers who have been stashing their cash away for the past decade have been rewarded with below-inflation interest rates that have eaten away at the spending power of their money.

“A saver who opted for a cash ISA would have fared slightly better, as average rates were higher over that period, but they would still be sitting on a £750 loss in real terms, with their £10,000 savings falling to £9,253.

“Rock-bottom interest rates have really harmed cash savers’ returns over the past five years. Over the past decade cash ISA rates were above inflation, sitting at around 2.7% in 2012. However, rates fell off a cliff in 2016 when the Bank of England slashed Base Rate, and since then savers have seen cash ISA returns below 1% while average easy-access cash account rates have dropped below 0.5%. At the same time inflation started to tick up, taking a further bite out of real returns.

“Lots of savers might be excited about interest rates finally increasing, with market expectations that interest rates will rise to 2.5% over the next year. But the impact of soaring inflation means that savers are going to be hit even harder in the coming 12 months. If that same saver keeps their money in an easy-access cash account it will be worth just £8,165 in a year’s time – a further loss of £460. The cash ISA saver would see their pot fall to £8,786 – a similar drop of £467. These figures also assume that banks pass on the full increase in the Base Rate – which many will not.

“Even new savers putting their money in the average cash account today and hoping to benefit from higher interest rates will see around £500 wiped off their savings over the next year. If someone put £10,000 in an easy-access cash account now it will be worth just £9,465 in a year’s time – a further loss of £535. That means £10,000 in your cash account is costing you £10 a week in real terms. A cash ISA saver would only fare slightly better and see their pot fall to £9,491– a similar drop of more than £500.

“Lots of people see cash as risk-free, but inflation is a very real risk to the spending power of their money. Anyone who has a significant amount of money in cash needs to do two things: get the best interest rate they can and work out if they have too much in cash.

“While no account will come anywhere near the current inflation of 9%, savers still need to maximise the return they can get on cash. Currently the top easy-access account pays 1.5% but you can get higher rates with regular saver accounts or fixed-term accounts.

“Savers also need to think about how much money they really need in cash. The FCA estimates that 8.6 million people have more than £10,000 of investible assets predominantly in cash. Anyone should keep money they need for an emergency pot or for short-term spending needs in cash and think about whether they can take a bit more risk by investing the rest of their money with the aim of generating inflation-beating returns.” 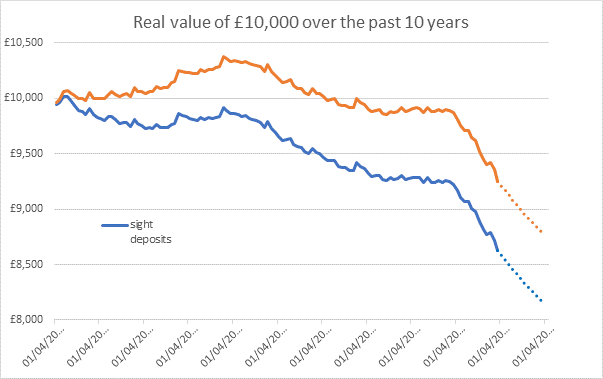 Laura Suter is head of personal finance at AJ Bell. She is a multi-award winning former financial journalist, having specialised in investments. Laura joined AJ Bell from the Daily Telegraph, where she was investment editor. She has previously worked for adviser publications Money Marketing and Money Management, and has worked for an investment publication in New York. She has a degree in Journalism Studies from University of Sheffield.