“Record first-half sales and yet another dividend increase are failing to put a shine on the share price of flooring specialist James Halstead, as investors focus instead on how increasing materials and energy prices are pressuring margins and profits,” says AJ Bell Investment Director Russ Mould. “The Manchester-headquartered firm is putting up prices, and this is not as yet hitting demand, which remains strong, but uncertainties over costs, product availability and the overall direction of the global economy remain and the shares are now down by more than a quarter from the late 2021 high.

“Chief executive Mark Halstead had already flagged these issues, and the likelihood of a slight drop in first-half profits, alongside February’s trading update so in some ways these issues should not be a surprise.

“In the first half, pre-tax profit slipped by 2% even as sales rose 5%, but an operating margin of 18.6% would still be the envy of many a firm, even if that represented a dip from 20.1% in the first half of the fiscal year to June 2021.

“The question now is whether analysts and shareholders will remain comfortable with the consensus estimates for the full year to June 2022. Going into the first-half results, analysts were currently looking for a 4% increase in sales to £276 million and a 2% increase in operating profit to £52.7 million (for a margin of 19.1% compared to 19.4% in the year to June 2021).

“That implies a 3% year-on-year increase in second-half sales and a 6% advance in operating profit. It also calls for an improved second-half of operating margin of 19.5% against 18.5% in the equivalent period of a year ago. The secret will be to what degree price increases can offset input cost inflation and impact to factory capacity utilisation that results from supply chain and raw material availability issues. 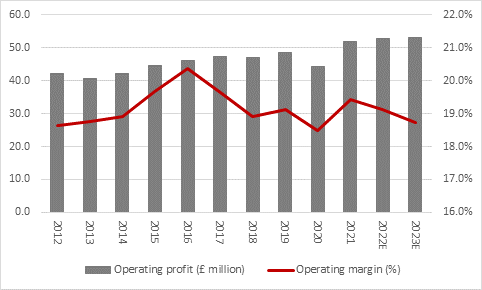 “The shares trade no higher now than they did in summer 2017, so investors are perhaps already bracing themselves for earnings forecast downgrades, although the good news is that James Halstead’s financial foundations remain very sound.

“The balance sheet shows £69.4 million of cash and no debt, with lease obligations of £5.7 million and a pension liability of £1.4 million, for a net cash position of £62.3 million. That is marginally down from the £72.7 million net cash pile at the end of the last financial year but the reduction is relatively minor in the context of £23 million of final dividend payments and a £23 million in inventory, designed to ensure stock availability.

“That financial strength, coupled with its lofty profit margins, should help James Halstead to come through the current squalls, and maintain its phenomenal record of growing its annual dividend in every year since 1977. 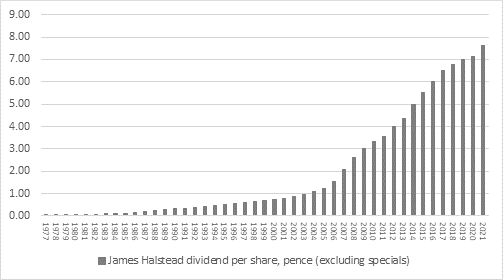 “James Halstead’s latest interim dividend is 2.25p, compares to the 2.125p announced a year ago, adjusting for the 1-1 bonus issue in January. That increase leaves the company on track to meet the consensus forecast for the year of June 2022 of 8p a share, up last year’s total distribution of 7.625p a share.

That 8p figure equates to a 3.5% prospective yield. Such a figure may not sound spectacular, the secret to the investment case for James Halstead has, thus far, been dividend growth. The share price was 0.145p when the dividend growth streak began in 1977, so an 8p-a-year dividend payment on that in price looks truly amazing now.”